Scott Davis Gets 25 Years in Jail for Biting Cop in Face While Naked, Tripping Balls in O'Fallon

Scott M. Davis Jr., 23, will serve 25 years in jail for assaulting a police officer and a woman in what will go down in St. Louis history as one of the craziest bad trips ever.

While tripping on acid with friends last year, Davis began to beat a woman with what police described as a "medieval-style club," breaking her jaw and causing severe bleeding, according to the St. Charles County prosecuting attorney's office.

He then stripped off his clothes and ran into the middle of the street in the 7900 block of Oakbark Court, where O'Fallon police officer Thomas Kenyon found him after Davis' father called 911. Davis told the officer he was "Lucifer" and knocked him to the ground, repeatedly punching him in the head and face.

Davis choked Kenyon, reached for the pistol in his holster and tried to bite his ear, sinking his teeth into the officer's face instead. Then, Davis grabbed the handle of Kenyon's Taser gun and hit him with it. 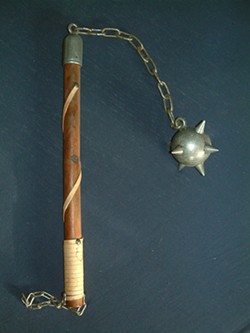 Kenyon managed to use the Taser on Davis, but it had no effect, according to the prosecuting attorney's office.

As Davis punched Kenyon in the side of the head, the officer realized he was about to lose consciousness and shot at Davis twice, in the arm and leg, according to O'Fallon police.

The gunshot wounds only slightly slowed his roll. Davis became violent again when back-up officers arrived but was eventually subdued and arrested.

Kenyon suffered injuries to the face, head, arms and legs and was later awarded the medal of valor from the city of O'Fallon.

Davis was found guilty of three felony counts: first-degree assault, armed criminal action and assault of a police officer. He was convicted on September 14, 2013, and sentenced by Circuit Judge Dan Pelikan on November 18.