Joe Edwards is kind of a nostalgic guy.

Wait, that's not right. Edwards isn't "kind of" anything. He's the pop-culture obsessed businessman who built up Delmar Boulevard into a glistening consumer/pedestrian paradise and created the St. Louis Walk of Fame, enshrining our city's finest in concrete plaques set in the sidewalk.

See also: Poop in the Loop: Who Let This Turd Sit on the Masters of Sex Walk of Fame Star? 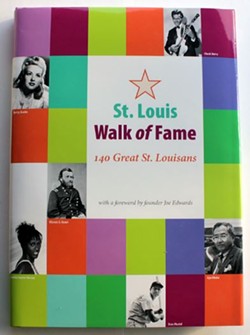 Edwards says the book will be donated to all junior high and high school libraries in St. Louis.

Of course, while Edwards may fancy himself an unofficial historian of St. Louis, the pony-tail wearing developer (Winner of RFT's "Best Local Impresario" award in 2013) is also trying to leave his mark on the city's future. For decades, Edwards has been trying to bring a fixed-track trolley connecting the Delmar Loop to Forest Park. The project has had its share bumps.

As we've reported before, Edwards and his partners (including University City mayor Shelley Welsch) are the target of multiple lawsuits from four University City residents, who allege that the project is disproportionately influenced by non-resident business owners.

"I'm not concerned about it, really. We've met the deadlines and we're going forward," Edwards says, adding that the project is currently being reviewed by the Federal Transit Administration. He predicts he'll hear back sometime in December.

Addressing concerns that he and other business owners have too much influence in developing the area, Edwards maintains he just wants what's best for the Loop, adding that he is "perplexed" by the timing of the lawsuit so close to the project's approval.

"I would never do anything to undermine 40 years of work to build up a city street that was in great decline," he says. "We followed every step of the law."