Missouri to Gays: You Can't Get Married Here, But We Will Take Your Tax Dollars 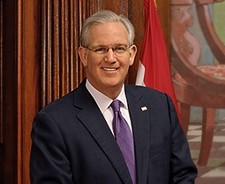 The order means same-sex marriages will be recognized for state tax purposes.

The change follows a ruling in August from the U.S. Department of the Treasury and the Internal Revenue Service that determined legally married gay couples can file their federal taxes jointly -- whether or not their state recognizes same-sex marriage.

Governor Jay Nixon: "I just don't think we should treat people any differently"

The executive order does not authorize or sanction same-sex marriage, which is banned in Missouri's constitution. Missouri is the first state to forbid gay marriage or civil unions and not recognize out-of-state same-sex marriages to accept joint filings from married gay couples.

"Missouri is one of a number of states whose tax code is directly tied to that of the federal government and under Missouri law, legally married couples who file joint federal tax returns with the IRS must also file joint state returns with our state Department of Revenue," Nixon says in a statement. "As a result, accepting the jointly-filed state tax returns of all legally-married couples who file federal returns is the only appropriate course of action, given Missouri statutes and the ruling by the U.S. Department of the Treasury."

"We applaud the governor for giving clarity to same-sex couples and providing guidance on how we complete tax return information in the state of Missouri," concluded A.J. Bockelman, executive director of PROMO.