See update below: A group of Kansas City atheists have been forced to take their goodwill elsewhere after a Christian homeless shelter banned it from volunteering there during Thanksgiving.

Members of the Kansas City Atheist Coalition have spent the past two Thanksgivings distributing boxed meals for the Kansas City Rescue Mission, helping to feed thousands of the city's most impoverished during the holiday.

But this year the mission has chosen to include a religious flier along with those boxes. The proposed message will read: "God Loves You. You Are Not Alone."

"We are faith-based, and we've never contradicted that," says Julie Larocco, the mission's development officer. "It makes sense to us to send people out who are representative of who we are."

But Jozef Hanratty, director of philanthropy for the KCAC. insists distributing religious fliers wouldn't have stopped the group's members from volunteering.

"I don't mind if someone believes or wants to proselytize their beliefs," Hanratty says. "My non-belief has never gotten in the way of me wanting to help someone."

Hanratty says he received an e-mail on October 30 from the mission announcing its intention to include Gospel messaging in its food boxes. The e-mail read, in part: 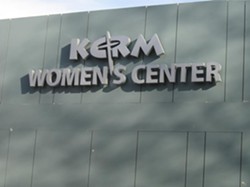 Suffice to say, both parties feel offended. Larocco says the mission was simply trying to avoid putting atheist volunteers in a position where they could be asked about God.

"If you include a Gospel message and you send it along with somebody who doesn't believe the message, what happens when the person who receives it at the door asks: 'Tell me more?' That would be almost ridiculous," she says.

See also: Salem Library Told to Stop Wiccan Censorship: "We Are Pleased This Matter is Behind Us"

The Atheist Coalition will still be raising money to "adopt" a needy family. Though it's too late for the group to arrange a different Thanksgiving charity project, Hanratty tells Daily RFT that he has received an "outpouring" of offers from other local ministries with volunteer openings for godless do-gooders. (See update below)

On the other side of the schism, Larocco says, losing dozens of atheist volunteers won't hurt the food drive, as there are many "individuals and families" more than willing to deliver meals (and the Good News) this Thanksgiving.

Update November 14: The Kansas City Atheist Coalition announced on their website that it will partner with The Micah Ministry of Independence Boulevard to serve a sit-down meal to 500-800 guests on Thanksgiving.

Senior Minister Lee Chiaramonte says his ministry does not require an acceptance of faith from those who volunteer or from those who need a warm meal for the night.

Here's KCTV's report, which includes an interview with Larocco.