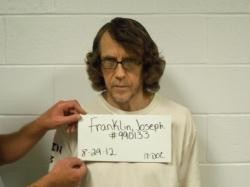 Larry Flynt is trying to halt the execution of Joseph Franklin, the man who shot and paralyzed him in 1978.

As represented by the American Civil Liberties Union of Missouri Foundation, the smut-peddler extraordinaire filed suit in federal court on Saturday to demand the unsealing of Franklin's execution documents.

Back in October Flynt used a guest column in The Hollywood Reporter to ask Missouri to spare Franklin and let the murderer serve a life sentence. He wrote: "I firmly believe that a government that forbids killing among its citizens should not be in the business of killing people itself."

"[Flynt] will be aware for the rest of his life what was done to him," says ACLU-MO executive director Jeffrey Mittman. "He wants to ask the governor to do the same thing for Franklin."

Flynt appeared on the BBC in October to explain his views on Franklin's execution,

Missouri has had a hell of a time figuring out how it's going to execute its death row inmates, and this isn't the ACLU's first time suing the Missouri Department of Corrections. The organization filed a similar lawsuit in October to release the name of the state's execution drug supplier.

This new lawsuit, insists Mittman, is the result the state's persistent "bad faith and hypocrisy" around the execution process. (You can read the full text of the lawsuit on the next page.)

"The public should not have to fight for information in drips and drabs," he tells Daily RFT. "This is an important public -discussion, there should be a full debate about the issues and all the information relevant to that should be available."

The lawsuit asserts that "secrecy surrounds" in the state's case, especially when it comes to the identity of the executioner, "M3," who the state claims is a board-certified anesthesiologist. However, Mittman points out that the American Board of Anesthesiologists does not grant certification to an individual who participates in executions.

In short, M3 is either lying about being board certified, or lacks the professional standing required to maintain certification. Missouri engages in hypocrisy by bolstering its claim that its executions satisfy Eighth Amendment standards by pointing to this inclusion of a certified anesthesiologist. Missouri knows that if M3 is, in fact, certified, then it is only because Missouri abets M3 in hiding his identity from those who certify him.

Franklin is scheduled to be executed on November 20, and Mittman says the state should halt its proceedings until the confusion surrounding the case is cleared up.

"It's not like if we don't do it now we don't do it later, and we can certainly say that information has been withheld from the public," he says. "With something as important as capital punishment, the public needs to know and needs to be certain that this is being done properly."

Continue for the full text of Flynt's lawsuit.