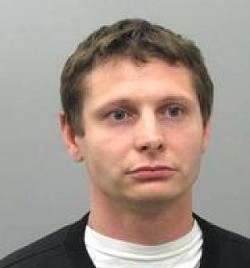 We'll probably never know who reported Anthony Brinkman's online ad, but whomever it was deserves a medal.

That's because police say Brinkman was looking for someone to beat and rape his own eleven-year-old daughter while he watched.

Thankfully, some Good Samaritan clicked the "report abuse" feature and triggered an investigation by the Missouri Internet Crimes Against Children Task Force.

According to the probable-cause report, an officer posing as a 27-year-old woman responded to the ad on October 31.

Brinkman, 32, of the 100 block of East Street in Cuba, allegedly told the undercover officer that he wanted "her" to use sex toys and perform sex acts on his daughter at his home. He agreed to meet at the Cracker Barrel in south county on November 1.

Brinkman was arrested soon after he showed up at the restaurant -- with his daughter in tow. Female officers brought the girl to police headquarters before relatives took her home.

Police say that during the arrest Brinkman admitted to posting the ad, and that he "might" be in possession of child pornography. Investigators seized his home computer and are awaiting the results of forensic analysis.

The Post-Dispatch reports that police don't believe the girl had been sexually assaulted by Brinkman in the past, but the investigation is ongoing.

St. Louis County prosecutors charged ﻿Brinkman with of one count of attempted statutory sodomy, and sex-trafficking charges are expected to be added at a grand jury hearing. Bail was set at $100,000.