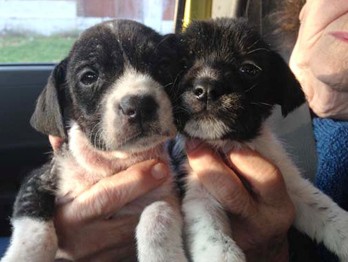 "That's a crazy amount in that amount of time," says director Jennie Foster. "Nobody could do that every day. We couldn't afford it. There's no space."

Near Penrose Park in north St. Louis, police reported a female dog and a litter of seven puppies living in a burnt-out garage with a collapsed roof. When Stray Rescue arrived, it found five additional strays, Foster says.

"You guys are safe now, we love you," a volunteer tells the puppies in this YouTube video:

The puppies are now staying with foster families.

Rustic, one of the dogs rescued from Penrose Park, found a cozy place to rest once back at the Stray Rescue clinic.

In south St. Louis' Carondelet neighborhood, a man throwing away his grass clippings discovered a box of nine puppies sitting on top of a dumpster.

"They had no idea who would have put them there," Foster says.