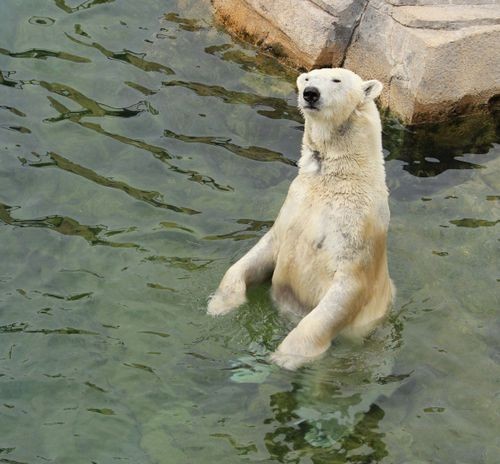 Ever since he was rescued by the Inupiaq Alaskan who killed his mother, Kali the orphaned polar bear seemed destined to end up in St. Louis.

Kali (pronounced "Cully") would be the first bear in the Saint Louis Zoo's state-of-the-art exhibit, now under construction next to the Penguin & Puffin Coast.

But there are way more zoos with polar-bear habitats than there are polar bears, and other cities are eyeing Kali and his playmate, Luna, while a New York senator fights to keep both cubs at the Buffalo Zoo until they're two years old.

"Until age two, bears usually have a very stable environment with their mother, and we just want to maintain that," Buffalo Zoo president Donna Fernandes tells Buffalo News. "He's doing so well, they both are, after starting off with such a troubled beginning."

Polar bears are listed as threatened under the Endangered Species Act, but tribal subsistence hunters in Alaska are allowed under federal law to hunt them. When Alaskan James Tazruk killed Kali's mother earlier this year, he didn't realize she was a nursing mother, according to TakePart.com.

Tazruk tracked Kali to his den 1,500 feet away, wrapped him in a pair of ski pants and transported him to Anchorage and, later, the Buffalo Zoo.

"Kali had a lot of issues," Fernandes says. "He had chronic paw-sucking behavior and was very fearful of new situations -- not uncommon for animals with troubled beginnings. Kali is doing better, but he follows Luna everywhere."

To maximize Luna's calming effect on Kali, New York senior senator Charles Schumer is urging U.S. Fish and Wildlife Service to keep the ten-month-old cub in Buffalo until he turns two, the typical age when bears become solitary animals, according to Buffalo News.

"It's clear to me that if you do what's best for the bear itself, it would be to leave him in Buffalo," Schumer tells the Buffalo News.

"The new St. Louis exhibit will have one of the most advanced polar-bear facilities in the country when it's completed in 2015," Amstrup tells TakePart.com. "The Saint Louis Zoo also is a leading research institution, and the people there are skilled in the challenges of managing small populations. It's also a brand-new polar bear exhibit with, currently, no polar bears."

St. Louis' $15 million polar bear exhibit will double the space of its old habitat, which had been home to polar bears from the 1920s until 2009.

Officials won't make a final decision on Kali's new home for some time, especially if Schumer is successful in keeping the cub in New York for another fourteen months. But St. Louis is patient. Our habitat won't be ready until Kali is an adult anyway.