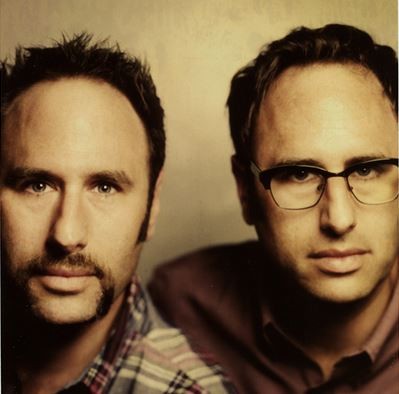 The Creve Coeur-born pair watched the World Series from their homes in LA, but distance didn't lessen the hurt from the Cardinal's big loss. As consolation, the brothers are returning to St. Louis this Friday for a show at the Cherokee Performing Arts Center, where the two hope they can heal the damage of a city's broken baseball dreams.

"This show is going to cure you from feeling bad, for a while," promises Randy.

The Parkway High School graduates spent years in New York City perfecting their act before shipping off to LA, where their bickering flow of characters, stories and sports fandom landed them a four-season gig hosting ESPN Classic's Cheap Seats and regular appearances on The Jim Rome Show.

We rang up the nebbishy duo to pick their telepathically linked brains (we assume) on getting over sports heartbreak, St. Louis and their latest project: celebrity bowling.

RFT: Let's not beat around the bush: St. Louis is still pretty raw from the World Series loss. How are you guys dealing?

Jason: Terribly. I am not getting over it.

Randy: You have to have an escape valve. It's like when a therapist tells you to punch a pillow, well I think we would probably not only destroy the pillow but the bird that gave it the feathers. You just get so mad. I think it's that we love our team so much that at times we just hate them. But I think the show is an opportunity to forget about that and laugh a little bit.

RFT: It's been a while since you made the trip home to St. Louis. What are you looking forward to?

Randy: We grew up in west county, and I love our neighborhood, and I love going back. It's just a feeling of peacefulness and calm. There's such a feeling of home when we go back there, even though we haven't lived there for almost 22 years.

Jason: We don't get fall out here in LA, and the leaves are changing colors in St. Louis which is awesome and I can't wait to see that. I love taking my son to Ted Drewes. It's such a treat, and it really holds up.

Randy: I think there's a Midwestern quality to us that comes through in our comedy, that I think we always reconnect with back home. The character and people are so colorful in St. Louis that I think it really helped define who we are.

RFT: You guys have straddled the world of comedy and sports commentary for awhile now. How do the two coexist?

Jason: That's always been a funny dichotomy about us. What we're trying to say is that sports don't have to be this meat-headed kind of affair. It's a balance, and it comes down to your comedic voice. What are you trying to achieve comedically? I think too many people in sports are concerned with things like, "Hey, we gotta get Deion Sanders on and just make him talk and it'll be funny! Put him in a dress! Put Michael Strahan in a dress!" No. That won't be funny. It would be way funnier to have Michael Strahan do a poetry slam.

RFT: We would pay good money to see a football poetry slam. But now you're working on a pilot for a celebrity bowling show on AMC. We get the celebrity part of it, but what's the attraction to bowling?

Jason: I'm super excited about the project. Cheap Seats was sort of a back door to a variety show, and I think this can be a chat show in the same way. Yes, the celebrities are going to bowl against each other, but really it's a chance to talk to them about what's going on with their lives, while at the same time commentating on a sport Randy and I grew up watching.

Randy: We are huge bowling fans. We used to bowl at Brunswick, we were in leagues there, we watched Earl Anthony. I have a patch at home that says "I Beat Earl Anthony," and it's the greatest thing ever.

Jason: Bowling isn't the most bang-bang sport, especially when armatures are doing it. There's time to call the action and there's room to be funny in between. That was one of the reasons why spelling bees were so magical for us on Cheap Seats, because they would give the word and the kid would be thinking and working it out, and we would have time to get like five jokes in.

RFT: Any last messages you want to get out there?

Jason: We just really want as many people to come out to the show so we can come back. We're crossing our fingers.