"Photography is not a crime," Suitter tells the three officers who escort him off a train and eventually handcuff him when he won't produce his ID -- all while Suitter's cell-phone camera is recording.

Suitter, who calls himself a video enthusiast, says he carries an $80 Flip video camera at all times so he can document his life. He says he was taking footage of the rail station when security approached and told him to stop.

Metro permits the general public to use hand-held cameras to take photographs, film, or video within public areas of Metro stations, transit centers, and transit vehicles for personal and non-commercial use...Please be advised that security personnel may approach photographers and videographers to inquire about their purpose. Activities may be limited for security, safety, or customer convenience.

"When [the security guard] told me it was against policy, I told him that was not correct," Suitter says. "He turned and called for the police, who were waiting for his motion. I saw them all gathering over there by the police substation. I knew they were talking about me. I know that because they were all looking at me." 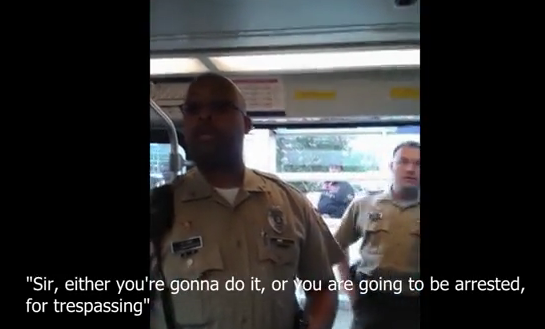 Police ask Suitter to leave the train, which Suitter does argumentatively while streaming video from his cell phone to a cloud storage device.

"I felt like I needed for this footage to go out live so that, in case they destroyed my camera or tried to erase the footage, I would still have a copy," Suitter says.

Suitter's video is going viral. Find out how many hits it's getting and watch more on-air arrests after the jump. When Suitter decides not to produce an ID card, officers follow through on their warning and handcuff him for trespassing.

Suitter posted his cell-phone video on YouTube the next day, and after just four days, it has already been seen more than 10,000, not counting the 41,000 views on the video-sharing site LiveLeak.com.

"I would never have published the footage if it hadn't been for the controversy surrounding it," Suitter says. "Nothing ever would have been done with that footage."

This isn't Suitter's first on-air confrontation with the law. He was arrested for trespassing at the St. Charles County Republican caucus in 2012 when he wouldn't stop filming despite a caucus ban on recording. Brent Stafford of O'Fallon was also detained and posted the two videos leading up to arrest:

Suitter even published a video tutorial called "How to handle police interrogations," outlining three steps to avoid "potential trouble": film the officer, have someone film you while you film the officer and respond to all inquiries with "I don't answer questions."