By his mid-twenties, Daniel Stern knew he was "horrendous" at sex.

"To say that I was proficient in premature ejaculation," he recalls, "would be a compliment."

OK, so maybe Stern is overstating things just a bit. But give the guy a break: Now a sexually empowered 38-year-old, the St. Louis-born screenwriter is kind of an unofficial spokes-stud for the swinger lifestyle by way of his first book: Swingland: Between the Sheets of the Secretive, Sometimes Messy, but Always Adventurous Swinging Lifestyle.

However, Stern didn't enter the world of soft-swaps, group sex and fetish play as a way to cash in on a book, he says. He was tired of his own sexual insecurity and the unfulfilling drudgery of long-term relationships. The solution, he decided, was lots of casual sex.

So he did what any desperate single guy does in the 21st century: He went online, signed up on some websites, pored over profiles and hoped against hope that some similarly minded woman (or couple) would respond to his e-mails. After two years of persistent networking (and enough positive reviews on his online profile) Stern found himself with all the playdates he could handle, and then some.

Daily RFT got a hold of Stern by phone at his home in LA, and we picked his brain about everything you've always wanted to know about swingers (but were too afraid to ask). 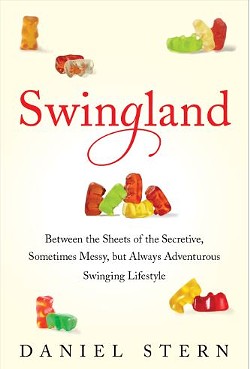 Daily RFT: You entered the swinging lifestyle as an unattached straight guy with barely any aptitude for sex. How did a guy like you stand out from the crowd?

Daniel Stern: Single guys -- all of us want to have sex. But we're a dime a dozen. On top of that, there's this whole stigma that single guys are rude, selfish, pushy people. There are a lot of single guys that don't understand the lifestyle.

Daily RFT: And you understood it?

Daniel Stern: It's just my nature that got me in. A lot of single guys think "lifestyle" equals "sex" -- they don't consider swingers as real people with emotions and thoughts and opinions. They just see them as bodies. That's why they get this reputation.

But sex is the result of meeting like-minded adults and good people. If you find that match, then there's sex. I saw the lifestyle as sort of a matchmaking experience; I wasn't pushing to get anything really quickly, I was just letting the process run its course. That's how I started to get successful. Granted, it took six or seven months until I started to get responses from people.

Daily RFT: That sounds like you had to take a lot of rejection.

Daniel Stern: In the lifestyle, you're going to have a tsunami of rejection. It is soul-rending, ball-crushing, daily rejection. You have to accept that. If you think you'll be on a site with a playdate after 30 minutes, you're setting yourself up. You gotta be persistent and patient.

Daily RFT: So how do you approach contacting people? Got any pro tips for guys struggling to communicate with potential couples/females online?

Daniel Stern: Before you even write the message, you need to read their profile. You have to understand what they're looking for. I'm five-foot-seven, I'm a white guy, I'm not going to e-mail a woman who's looking for a six-five guy with a BBC, which is a big black cock. And if they haven't written anything, just start asking: What do you like? What don't you like? What are your limits? What have you always been curious about? Are there positions, certain scenarios, certain locations? You want to get those details.

Continue for the rest of our interview, wherein Stern discusses how he lost his lifestyle "virginity."

Daily RFT: Once you finally got a response, though, what then? Did you feel any trepidation -- or regret -- when the time came to actually go through with it?

Daniel Stern: You have a lot of expectations and hope going into it. Some things so basic as, "Is their picture really what they look like?" or, "Is that chemistry we had over e-mail going to translate into real life?" And then finally if you get into the actual act of sex, how is that going to go? Will I please her, or them? Will I be able to perform?

Daily RFT: That sounds like a lot of anxiety. Did that ever affect your, um, performance?

Daniel Stern: I've been lucky. I haven't had any issues with that. I ascribe it to the fact that I spent all that time getting to know these people. Yes, there were physical mechanics I was focusing on and trying to improve on, but I had this relationship with them as real people, and that put me at ease.

Daily RFT: OK, we're dying to know: What was your very first lifestyle "encounter" like?

Daniel Stern: The experience wasn't the best for a few reasons.

One, we had battling body types. She was a little larger, and we weren't very compatible that way. The other thing was her bed: It was like this raised princess bed, and I had to pull myself up and roll on to it. She had these silk or satin sheets, and they didn't absorb body sweat. And she had very soft mattress. It was sort of like we were on this bouncy house Slip 'N Slide. It wasn't very fulfilling.

The cherry on top of that awful sundae was when we finished and we're lying in bed, she says, "Well, I'm officially no longer a virgin." And I sort of laughed and said, "Yeah, this was my first time too using the site." And she looks at me, and says, "No, that was my first time."

So I was really her first. I didn't see her again. It taught me you have to ask all the questions upfront. You have to be thorough.