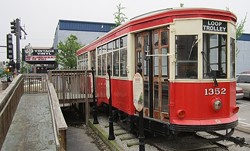 Supporters of the Loop Trolley project mailed final plans this week to the Federal Transit Administration. If the federal regulators approve the proposals, bids for construction of the 2.2-mile trolley connecting the Delmar Loop to Forest Park could go out as soon as mid-November.

"I'm more optimistic now than I have been in a while," Joe Edwards, chairman of the Loop Trolley Transportation Development District, told Daily RFT on Tuesday. "It's been a long time coming. This is something I've been working on since 1997."

Those comments, though, came just prior to the filing of a federal lawsuit also on Tuesday that aims to derail the trolley before it ever hits the tracks.

The four plaintiffs (University City residents Elsie Glickert and Jen Jensen and two others) seek a permanent injunction to stop construction of the trolley. Among their many claims, the plaintiffs contend that non-resident property owners got more say than residents in the formation of the Loop Trolley Development Transportation District. For example, Washington University and Joe Edwards (who owns Blueberry Hill, the Pageant, Pin-Up Bowl and other destinations along the trolley route) allegedly controlled 26 percent of the vote. The district later set up a one-cent sales tax for businesses along the route of the trolley. The plaintiffs also argue that the trolley exceeds its approved boundaries in University City and St. Louis.

The lawsuit is only the latest challenge for the Loop Trolley, which is already months behind schedule. This spring the Federal Transit Administration threatened to withhold $22 million in grants due to "insufficient progress" on the trolley project. But earlier this week Edwards was confident that issue had been resolved. "I think the concern was that we didn't have enough contingencies in place," said Edwards. "Our goal has been to get everything on their checklist."

Should the transit agency approve the final plans for the trolley and the lawsuit not impact the time table, the next hurdle in the project could come once bids come back for the project. "The biggest unknown is the real costs [of construction]," said Edwards, who anticipates the project's total price tag at around $40 million.

Federal money is expected to pay for $25 million in planning and construction. The remaining $15 million would come from various local taxes and other fundraising. Provided that the project comes in within cost, Edwards predicted construction could begin as early as this coming March. That is, if that pesky lawsuit doesn't get in the way. Edwards could not be reached immediately for reaction to the court filing.