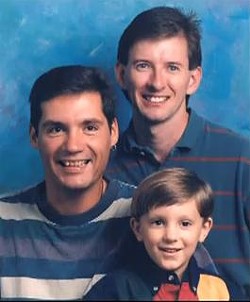 Despite a fifteen-year relationship, the court rejected Glossip's appeal because he and Engelhard weren't married.

On Christmas morning in 2009, Englehard was assisting a stranded motorist when he was struck and killed by an SUV that had lost control in the ice and snow.

One year later, with help from the American Civil Liberties Union of Eastern Missouri, Glossip sued the Missouri Department of Transportation and the Highway Patrol Employees Retirement System.

In rejecting Glossip's appeal, the court ruled 5-2 that the the state's definition of marriage was irrelevant to the case. The only question the court looked at was whether the state can award or deny benefits based on marital status.

From the court's decision:

The only decision the Court makes here has nothing to do with the rights of same-sex partners. Instead, the Court merely upholds the General Assembly's right to award and deny survivor benefits based on whether the claimant was married to the patrolman at the time of death.

As Daily RFT reported back in Feburary, the ACLU had gone into this appeal hoping to link the two issues. As legal director Tony Rothbart said at the time, "If you're going to exclude a whole class of people from marrying, you can't then make benefits contingent on marriage."

That line of reasoning was echoed in Judge Richard Teitelman's withering dissent, where he wrote that the court's decision allows the state to make survivor benefits "legally impossible to obtain only for gays and lesbians."

This holding overlooks the fact that [the survivor benefits statute] employs a definition of "spouse" that operates to the unique disadvantage of gay men and lesbians, even when, like Corporal Engelhard, they devote their lives to the defense of the same rule of law that relegates them to the status of second class citizens.

The court's full decision is lengthy but worth the read, especially for Teitelman's dissent. It's embedded on the next page.

Update 3:30 p.m.: Daily RFT reached out to Tony Rothert, the legal director for the American Civil Liberties Union of Eastern Missouri and also one of Glossip's attorneys.

"It's a disappointing decision," he says, "But we knew and Kelly knew that discrimination against people based on their sexual orientation is deeply entrenched in Missouri."

As for the Glossip's case, the battle is lost. There are no more avenues for appeal, and Rothert describes the court's decision as "disastrous." However, he maintains this defeat is just "one step along the way to equality in Missouri."

Rothert guarantees: "There will be next steps soon."

Continue for the full text of the Missouri Supreme Court Decision.