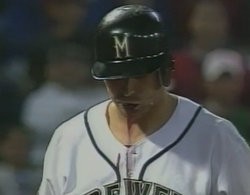 If you thought Cardinals manager Mike Matheny was tough during the screaming match with umpires in World Series Game One, wait till you watch this video of him as a player getting smashed in the face with a 90-plus-miles-per-hour pitch.

Matheny barely reacts, spitting out what looks remarkably like brain and resting casually on his bat as home-plate umpire Jerry Crawford and Pirates catcher Jason Kendall wave for help from the Brewers' bench.

"He never went down, first of all, which is amazing," says Matt Vasgersian, then the Brewer's TV guy and now on the MLB Network, to MLB.com. "It was almost like when a fly flies in your mouth. You try to spit it out and go, 'What was that?' Like he was annoyed more than anything."

Matheny did need a double-check with a friend to make sure he still had his head on straight. Via MLB.com:

After the game, Matheny approached Jeff Cirillo, a fellow '91 Draft pick and his oldest friend in the organization.

Matheney needed four stitches, but that didn't stop him from playing the next day -- or blowing it off like it was a hangnail.

"It was just a couple of teeth and a bunch of stitches," Matheny said, according to MLB.com. "I was able to go to Phil Garner right from the hospital and say, 'If you can do me any favor, I want to play tomorrow.'"

"Right when he got nailed, you could tell his first thought was, 'Don't go down,'" Freese told MLB.com. "He walked it off with a mouthful of blood. That says something about what kind of guy he is."

Mike Matheny is so hot when he's angry

Thought of the night- Mike Matheny is incredibly hot when he's mad. #DivorceYourWifeAndMarryMe