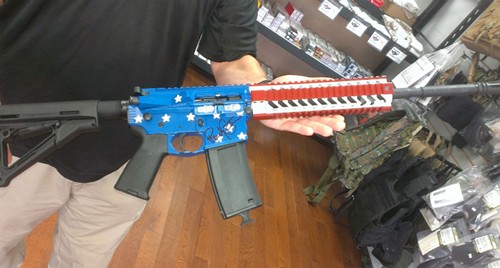 The Defensor Tactical gun shop in Valley Park is giving away an AR-15 rifle painted like an American flag to benefit a charity that helps war veterans suffering with PTSD.

"We coated the AR-15 in an American flag because the point is to be patriotic and help veterans," says Joel Fields, President of Defensor Tactical.

Fields' store, which specializes in tactical weapons and ammunition, will announce the winner of the patriotic AR-15, signed by Army veteran and MMA champion Randy Couture on October 31. Tickets are being sold for $5 or 4 for $15. The proceeds of the raffle will go to Couture's Xtreme Couture G.I. Foundation, a nonprofit that assists veterans wounded in action, as well as their families.

Couture, who spent six years in the Army during the 1980's, says his foundation's goal is to help today's soldiers coming home from the wars in Iraq and Afghanistan.

"When I was in the Army, there were no wars going on. I never really had to put it on the line," says Couture, who served between 1982 and 1988. "But these guys now with the War on Terror and 9-11, are putting it on the line and a significant number of them are coming back wounded. And the huge issue we're dealing with now is the suicide rate, guys dealing with PTSD."

Supporting soldiers with PTSD by raffling off a gun may sound as logical as supporting endangered species by auctioning a permit to hunt a Black Rhino. Gun shop owners disagree. Find out why after the jump. See also: Combat veterans fall prey to gambling addictions at an alarming rate. Where's the military when the chips are down?

Giving away an AR-15 painted with the colors of the American flag to benefit American soldiers suffering from PTSD might strike some as controversial. But Fields says it shouldn't be.

"It's an inanimate object. Whether you support guns or you don't, it's the person," he says. "And obviously I understand that some people will not like firearms, but it is our Second Amendment right."

Fields served 13 years in the Army, including two deployments to Iraq, and has dealt with PTSD himself. What matters to him, he says, is to help today's veterans.

"My personal goal with this program is to try and raise awareness and to remind veterans that they are supported, they are appreciated for what they did," he says. "And I'll do whatever I can, whether it be raising money for them or going to events that supports them."