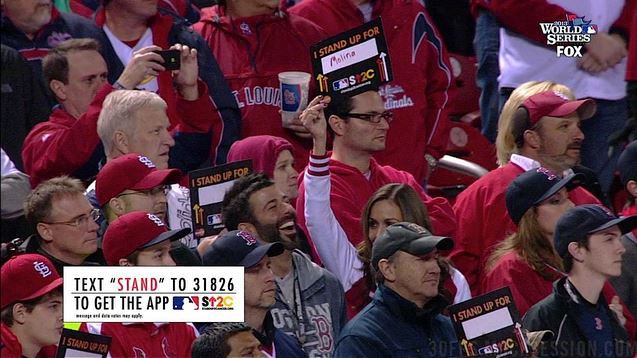 Sarah Newlon, a Season 11 The Bachelor contestant and Cardinals fan, does not think it would be funny if St. Louis Cardinals catcher Yadier Molina had cancer.

That might seem like an obvious statement, but when photos of her brandishing a Molina sign and laughing with a Boston Red Sox fan during Sunday's somber Stand Up to Cancer moment, Cardinal Nation erupted over her inconsiderate misstep.

Just minutes after the Game 4 moment of silence for cancer survivors, Newlon says her phone started blowing up with hateful tweets and texts.

"Every five minutes, I have 15 notifications of people telling me to die, saying I'm a disgrace to Cardinal Nation, to go back to wherever I came from and to never come to St. Louis again," Newlon says. "This small little moment of me holding up my favorite player's sign turns into, 'I want Molina to have cancer.' I think it shows how mean people can be, taking something so small without even trying to get all the information."

See also: 9 Most Cringe-Worthy Cardinals Fan Songs of All Time

Newlon says she would never make jokes about cancer or about Molina, her favorite player, especially since Newlon's mother is a two-time breast cancer survivor. Newlon herself was diagnosed with a heightened risk for cancer, and her boyfriend, the Red Sox fan she's laughing with in the photos, raises money for prostate cancer during the annual Movember campaign.

Newlon isn't even the one who wrote "Molina" on the card. As she entered Busch Stadium after some pregame drinking with her boyfriend, a volunteer asked who her favorite player is ("Molina, I'm obsessed with him.") and wrote his name on her card. Her boyfriend didn't take a card because, as a Red Sox fan, he wasn't rooting for any Redbirds.

"I thought, honestly because I wasn't looking at all the signs, that everyone had their favorite Cardinals player," she says. "Why would I ever make that joke? I don't think even a junior high person would make a joke about cancer."

See how Newlon defended herself against attackers on Twitter after the jump. Newlon, who was also on Season 3 of the Bachelor spin-off Bachelor Pad, rushed to Twitter to defend the incriminating photos.:

For those that think I would ever mock cancer, my sign meant which player inspires me to stand up to cancer. Im sorry it came across poorly.

Regarding the smiles, those around us pointed us out on the jumbotron, and that's what we smiled about.

In no way would we ever laugh or make fun of cancer.

Newlon's sign drew ire and anger from Cardinals fans, who just assumed she was rooting for the Red Sox.

I hope the #RedSox fan who held up Stand Up For Cancer with Molina's name on it...accidentally has a beer dropped on their head.