Jedidiah Stout's motto should be: "If at first you don't succeed, try burning it down again."

A 29-year-old Iraq War veteran who described himself as "Crazy as Shit" on a dating website, Jedidiah Stout has been implicated in two separate arson cases in Joplin.

The FBI arrested Stout last Friday after uncovering evidence suggesting he was the arsonist who tried twice (unsuccessfully) to burn down the Planned Parenthood in Joplin on October 3 and October 4. Once in custody, Stout confessed to setting both fires.

But court documents revealed that Stout also confessed to setting fires at the Islamic Society of Joplin's mosque on July 4 and August 7.

According to a probable-cause statement, Stout was first picked up by local police on October 4 while wandering some railroad tracks just five blocks from the local Planned Parenthood building -- a building that someone had attempted to burn down twice in as many days. 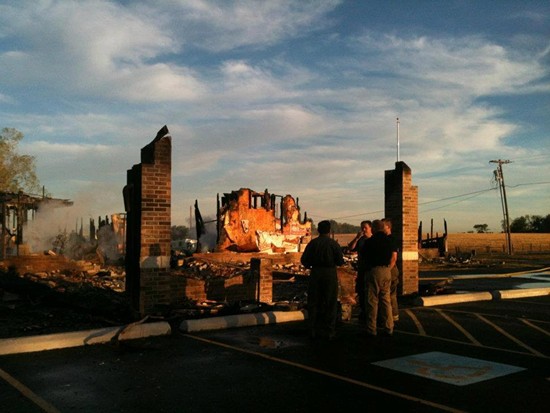 Sweating profusely, Stout apparently told police that he was drunk, "sort of homeless" and just out for a stroll. However, according to the arresting officers, Stout didn't smell of alcohol and didn't appear drunk.

In fact, his hands smelled of lighter fluid, and he had a lighter in his front pocket. Officers noted that Stout didn't smell like cigarette smoke nor did he have any cigarettes on him. They arrested him for trespassing.

The investigation eventually connected the materials used in the Planned Parenthood fires to purchases Stout made at a nearby Walmart. In both attempts a backpack trailing a length of camouflaged rope (which served as the fuse) was thrown onto the clinic's roof.

Both the backpack and the rope were traced back to the Walmart's pet-care section. Surveillance footage from October 1 showed Stout buying his supplies.

Then, on October 17, a Missouri State Highway Patrol lab notified the FBI that it had uncovered a latent print on a plastic bottle found at the scene of the October 3 fire. The print was matched to Stout's right thumb, and the FBI arrested him the next day.

It was during Stout's confession that he admitted to setting the August 6 fire that destroyed the Islamic Society of Joplin's mosque. 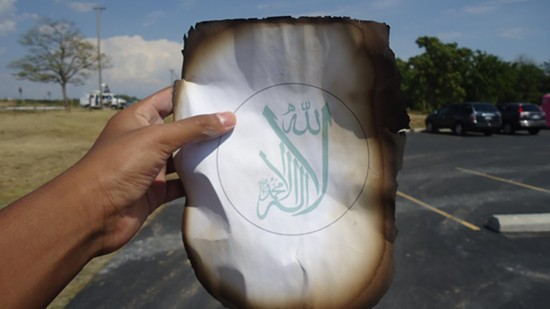 No charges have been filed against Stout in connection with the mosque fire, and he gave no motive for his actions. Citing U.S. Army records, The Los Angeles Times reported that Stout was a combat engineer from October 2002 to July 2005 and had deployed to Iraq from September 2003 to September 2004.

Imam Lahmuddin of the Islamic Society of Joplin told The Times: "His arrest will not bring back our mosque, but we at least feel relief, and we know who did what he did."

Continue for court documents that go into greater detail on how the FBI caught Stout.

And here's the motion for detention.