Should St. Louis Cardinal Michael Wacha Shave the Beard Before the World Series? 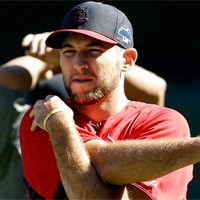 Mayor Francis Slay is polling his St. Louis constituency on their favorite local beard this week, and gaining momentum in the polls is the man everyone's talking about: Cardinals pitcher and NLCS MVP Michael Wacha.

Wacha has tough competition, including entrepreneur Joe Edwards, County Executive Charlie Dooley and even Quentin the Miracle Dog, who is beating Wacha by 6 percentage points.

But while Wacha's beard, and his pitches, are impressing his St. Louis fanbase, is his modest facial covering enough to face the Boston Red Sox, a.k.a. Beardtown, the Beard Sox and "the greatest bearded baseball team since the House of David?"

#Cardinals Michael Wacha on his modest beard, heading to Boston for WS: "I might have to shave mine, so I don't get embarrassed." #RedSox

(By the way, not every Red Sox fan likes the beards:)