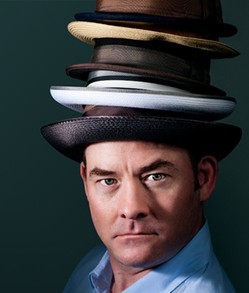 Comedian David Koechner may be best known as the sensitive buffoon Champ Kind in Anchorman or Todd Packer on The Office, but did you know he's also a Missourian?

Koechner is a busy man. He's got Anchorman 2: The Legend Continues opening in December. The be-hatted comedian has also received rave reviews for his twisted performance in the equally-twisted thriller Cheap Thrill, which will open next year.

Even so, Koechner has found time to make a quick stop at Lindenwood University in St. Charles tomorrow for a stand-up comedy show in Bezemes Family Theater, and Daily RFT has tickets to give away!

Just put your e-mail address in the comments section and we'll throw those names into (of course) a fedora. The winner gets two tickets to tomorrow's show.