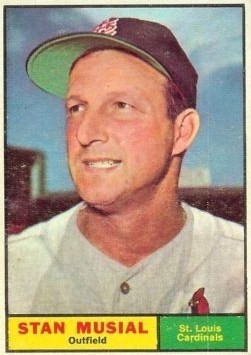 According to (and buried way far down in) a sports column published in USA Today, Dodgers fans in Los Angeles yelled, threatened, threw popcorn at and tried to trip the grandson of Stan "The Man" Musial and his friends while they watched Games 3 and 4 of the postseason series against the Cardinals this week.

"Can you imagine that happening in St. Louis?" Brian Schwarze, 32, told the paper.

Schwarze was wearing a Musial Cardinals jersey at Dodger Stadium, and "people kept telling me, 'You better take that (expletive) thing off.'"

As if all this Mickey Mouse bologna weren't enough...

...now they gotta mess with the progeny of baseball's perfect warrior, who died in January.

It all comes down to the tradition of old-time baseball, which, as winners of eleven World Series titles with the second-best attendance stats in the game, the Cardinals espouse effortlessly.

"This is St. Louis, we have values here,'' Schwarze said. "My grandfather used to always tell me, 'This is a gentleman's game. You play the game right.'"

We've reached out to Schwarze to find out more about his experience in LA -- we'll update if we hear back.