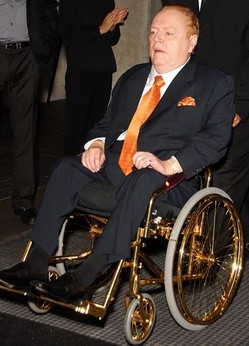 Larry Flynt hasn't forgiven Joseph Franklin, the serial-killing white supremacist who 35 years ago shot and paralyzed Flynt on the steps of Georgia courthouse after Hustler ran a photo spread of an interracial couple.

Franklin is set to be executed on November 20 for a laundry list of horrific killings, not to mention a handful of bank robberies and bombed synagogues.

Here are a few excerpts:

Franklin has been sentenced by the Missouri Supreme Court to death by legal injection on Nov. 20. I have every reason to be overjoyed with this decision, but I am not. I have had many years in this wheelchair to think about this very topic. As I see it, the sole motivating factor behind the death penalty is vengeance, not justice, and I firmly believe that a government that forbids killing among its citizens should not be in the business of killing people itself.

Now, none of this should be interpreted as a sign that Flynt has gone soft in his old age, as evidenced in this passage:

In all the years since the shooting, I have never come face-to-face with Franklin. I would love an hour in a room with him and a pair of wire-cutters and pliers, so I could inflict the same damage on him that he inflicted on me. But, I do not want to kill him, nor do I want to see him die.

You can read Flynt's column in its entirety here.