On Sunday night more than 50 contestants gathered in the Millennium Hotel to compete in the 2014 Miss Gay America pageant, a national contest established in 1972 for female impersonators. Among them were three local girls whose rhinestones, false eyelashes and jazz hands did the Show-Me State proud.

As the lights went down in the Millennium Hotel's grand ballroom and spooky, majestic music pumped through the speakers, two angels with black gossamer wings ran down the center aisle to the stage. Miss Gay America 2013 Sally Sparkles followed in an opulent white gown, lip synching to a cover of the Scorpions' "Send Me an Angel." The ballad soon gave way to dance music, and Sparkles traded her long gown for a miniskirt as all 52 contestants strutted onto the stage in white formalwear for their introductions.

Andrews sported a pale aqua gown featuring iridescent sequins and a side ruffle. She shared that slow drivers annoy her and that the best advice former Miss Gay America winners have given her was to always wear your imaginary crown.

Collins, the reigning Missouri winner, wore a pastel pink gown with a chiffon train. After gracefully walking the stage, she explained that the most challenging issue in the female impersonation industry was the inability to look at different types of drag as being valid.

Sinclair, the Kansas queen from Missouri, was clad in a vibrant red cap-sleeved gown covered in sparkly lace panels. She told the audience that if chosen as Miss Gay America, she would lead with humility and approachability.

The evening-wear portion wasn't without its problems, however. As Miss Gay Atlantic States America LaQuitcha Rodriguez finished her interview, the stage decorations attached to the back curtain began to peel off. Stagehands rushed to fix the situation, but the decorations they tried to lift away knocked against the words "Miss Gay America" -- particularly the word "Gay' -- prompting the emcee to exclaim, "No! Not the 'Gay'!"

With the interviews wrapped up, a few previous MGA winners entertained the audience with their lip-synch talents, including a remarkable Reba McEntire impersonator who performed "Fancy." Clad in a red gown with sparkly silver accents over the breasts, "Reba" strutted the stage and raked in the applause.

Andrews was first up for the talent competition, and her extravagant set decorations established the tone for most contestants in the category. Portraying Liza Minnelli in a black jumpsuit and spiky black wig, Andrews performed Minnelli standards in front of a lighted New York City skyline. Andrews then changed into a bodysuit and welcomed two backup dancers to the stage before launching into a Liza cover of Beyonce's "Single Ladies."

Continue for more rhinestones and the winner of Miss Gay America. 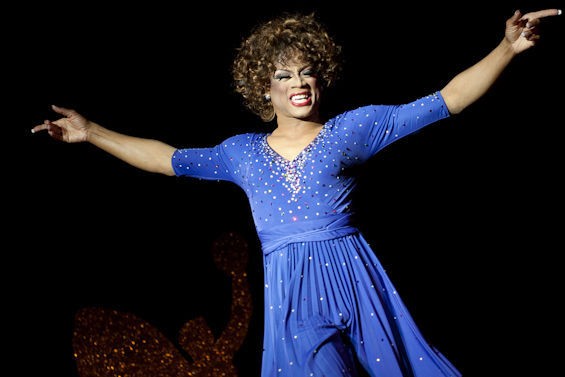 Collins paid tribute to A Chorus Line, performing in a sparkly purple skater dress to "The Music and the Mirror." Using only a spotlight on the dark stage to highlight her moves, she drew an ovation when she gracefully extended her arms and almost touched the floor during a deep backbend.

Sinclar played Madonna dressed as an Egyptian warrior, performing a remix of "Vogue." Surrounded by male and female backup dancers and standing high on a gold dais, Sinclair moved just as much as the Material Girl does, offering a production worthy of Las Vegas.

The other top-ten contestants paid homage to musicals and icons as well, with intricately choreographed productions featuring Barbra Streisand songs, Cats and Chicago being hits with the audience. But it was Miss Gay Western States America First Alternate Truly Fabu who brought down the house with her Broadway-worthy performance of songs from the musical version of The Addams Family. With the family's haunted mansion and graveyard taking over the stage, Fabu did cheerleader pyramids and flips while singing "Pulled" and mixing in Scissor Sisters' "Let's Have a Kiki."

As the judges ran off to add up the points for the evening's final categories, 2013 winner Sally Sparkles returned for her goodbye performance. She emotionally lip synched to "For Good" from the musical Wicked, bringing out her young niece Darby McBride who was dressed in a pink gown, updo and glitzy crown that was identical to those of Sparkles'. As is customary at female impersonation shows, audience members rushed to the stage to offer dollar bills to the entertainer, thanking her for her service during her reign as Miss Gay America 2013. All 52 contestants reemerged on the stage to offer dollar bills as well, and Sparkles began to tear up as she continued "singing." Her farewell "lap" lasted for about 30 minutes, resulting in the night's longest standing ovation.

But the Show-Me State didn't show enough, as the 2014 Miss Gay America crown went to Jessica Jade, Miss Gay East Coast America. Jade clutched her heart and heaved as the former winners placed the crown on her head, gave her a bouquet of flowers and draped a sash over her gown.

"It was a fabulous year for Sally Sparkles," pageant co-owner Larry Tyger later told Daily RFT. "And Jessica Jade is very deserving. She's been in the system for nine years, and she'll be a great representative as Miss Gay America." 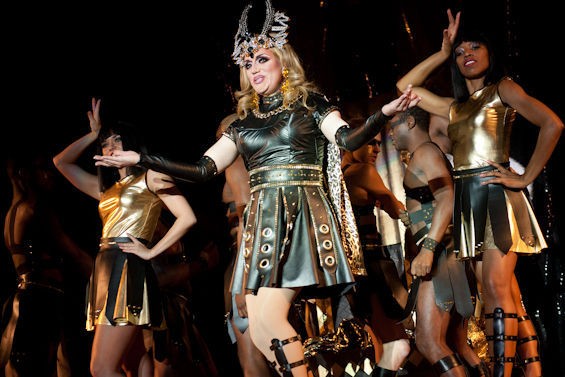 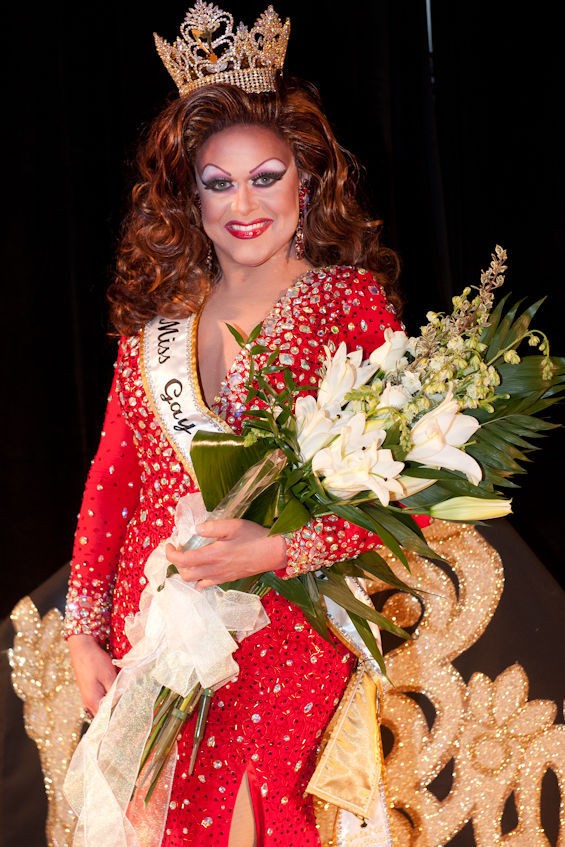