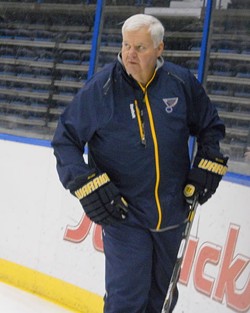 It's a good thing half of Scottrade Center was empty last night owing to the Cardinals' game because the Blues' best start in franchise history came to an ugly end against the San Jose Sharks in a 6-2 loss.

The horror show started with the national anthem as a Boeing logo hovered over the American flag on the jumbotron in as grotesque a display of shameless corporatism one could imagine without it turning into a Banksy piece.

And then there was the game. It was supposed to be a showcase of the top two teams in the Western Conference, both unbeaten, both with high-octane offense and stingy defense. It wasn't.

Just a few minutes into the first period, Maxim Lapierre shoved Sharks' defenseman Dan Boyle from behind, causing the latter's head to smack against the cliff of the boards, his neck snapping back like a Zippo top.

As he lay motionless on the ice, medical staff from both teams tending to him, Matt Pelech and Ryan Reaves pretended to fight, but it looked like they were just entangled in a macho embrace -- even the referee didn't feel the need to step in when it was painfully obvious they both wanted him to.

Boyle had to be taken out on a stretcher and will no doubt be off the ice for a while. Lapierre is suspended pending a hearing in which several hockey analysts expect he'll get a ten-game ban.

The Sharks' Logan Couture had some tough words for Lapierre, according to the Post-Dispatch:

"It's just disgusting to see that type of play in hockey," said Logan Couture, "when a player that probably shouldn't even be in this league is taking out one of the best players in the world. (Lapierre) has got a history."

San Jose would go on to score five straight goals and out-shoot the Blues nearly 2-1 before St. Louis would finally be able to put one in the net. But it would be too little too late.

The Blues are expected to contend for the Stanley Cup this year, but so are the Sharks. And last night's game was an indication that despite the great start, the Blues have a way to go.

The Blues out-hit the Sharks, but it didn't appear that way. The San Jose offense, known for their size and skill, constantly peppered Halak (and Elliot in the third period). And the Sharks' defense handled the Blues forwards with ease, allowing few quality scoring chances and blocking shots like Bob Saget at a pool party.

But with 77 more games to go this season, coach Ken Hitchcock has time to figure it out. Lapierre might even be off suspension by then.