Gerald Uden, 71, and Alice Louise Uden, 74, of the southeastern Missouri town of Chadwick, were arrested last week on first-degree murder charges for the deaths of their ex-spouses and two young children more than 30 years ago. Once extradited, the couple will face those charges in Wyoming.

Gerald Uden's ex-wife, 32-year-old Virgina Uden, disappeared in Fremont Country, Wyoming, in September 1980 along with her two children, Richard Uden, 12, and Reagan Uden, 10. According to ForTheLost.org, which tracks missing-persons cases, the car they had been traveling in was found abandoned one month later, splashed with Virginia Uden's blood.

Gerald Uden was arrested Friday and was charged with three counts of first-degree murder.

Citing an affidavit, The Associated Press reports that Gerald Uden allegedly confessed to the killings on Friday, saying that on September 13, 1980, he'd picked up his wife and her two children to go on a hunting trip. He drove them to an area near Pavillion, Wyoming, in Fremont County, and after they exited the car he shot all three with a .22 caliber rifle that Virginia Uden had brought along for the family hunting trip.

He then allegedly hid the bodies.

As for Alice Uden, she is accused of murdering her husband in 1974 or 1975. It's not clear if one killing is directly related to the other, but according to an affidavit the disappearance of Virginia Uden and her sons led detectives to another disappearance case, this one involving 25-year-old of Ronald Lee Holtz, Alice Uden's long vanished ex-husband.

Holtz's remains were discovered in an abandoned mine shaft this August, his identity confirmed by DNA. Alice Uden was arrested Thursday for murder in the first degree. 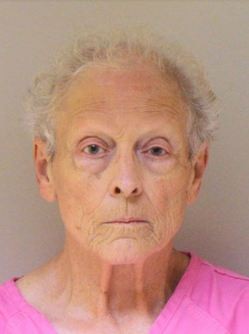 However, the path that led to Alice Uden's arrest has a number of odd gaps. All the way back in 1989, an unnamed witness told police that Alice Uden had confessed to killing Holtz by shooting him in the head with a .22 rifle while he slept. They had been married only five months.

According to the affidavit, Alice Uden had allegedly told the witness that she wrapped Holtz's dead body in blankets and placed him in a cardboard barrel before dumping the corpse in an abandoned mine shaft in Remount Ranch in Laramie County.

The investigation into Holtz's disappearance didn't pick up again until 2001, when that same witness was re-interviewed by detectives, laying the foundation for Alice Uden's eventual arrest.

In 2005 Alice Uden was visited in Missouri by two agents of law enforcement. They asked her to provide a family tree, which she did. But she left out her marriage to Holtz. The agents returned the next day and confronted her about the omission. From the affidavit:

As his name was mentioned by Agents, A. Uden fell back against the wall. A. Uden stated, "My kids told you." A. Uden advised that she had not mentioned Holtz to the investigators because the marriage was so brief, and she never considered it a real marriage.