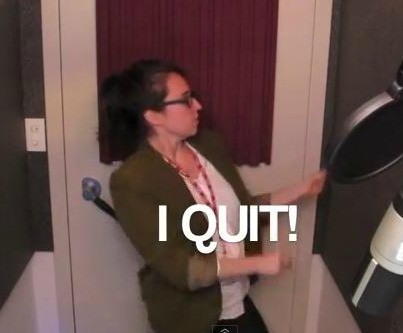 About eighteen months ago Marina Shifrin packed up and moved from New York City to Taiwan to work for Next Media Animation, a company that produces intentionally bizarre CGI animations to go with off-color news reports. The results often go viral, like NMA's portrayal of Tiger Woods' falling out with Elin Nordegren.

For Shifrin, a University of Missouri School of Journalism graduate, the job was in theory a perfect marriage of her two passions -- journalism and comedy. But the relationship officially ended on Friday when she uploaded a video to YouTube with a special message for her bosses.

"I went crazy a little bit," Shifrin told Daily RFT from Taiwan where she was preparing to board a plane back to the U.S. "I snapped, and that was the video."

Shifrin says although she loved Taiwan, her time abroad has been isolating. She worked a night shift (8 p.m. to 5 a.m.) at NMA, and she doesn't speak Mandarin. Although she says she became friends with her boss, they increasingly fought over how many clicks and views her work received in the nonstop struggle to create viral videos (if you'd like to learn more about the NMA process, Shifrin actually gave an interview about it to Gizmodo about a year ago).

"It was horrible," she says. "I've always used humor to deal with anything that's difficult in my life. In that video you're genuinely seeing me unravel and the end result was...it was just so silly."

Shifrin says she called her boss' boss before uploading the video to put in her notice, but did not tell anyone but her friends and family about the YouTube clip. She also uploaded a resignation of sorts from all of journalism on her blog (wherein she describes her beloved time at Mizzou):

I am not saying that all journalism is bad. I am saying that most popular "journalism" is bad. You can't blame the writers, though, we're scared into it. We're the ones writing the stories about the poor job market, we're the ones sitting in classes that have adopted the motto, "Journalism is dead." That's why when we find a job that remotely carries even just the slightest essence of journalism we gently bend at the waist, place our elbows upon our desk and let the Clicks have their way with our posterior.

I've done it. I was pissed when someone else got to the "Miley Cyrus Twerking" story before I did.

Not surprisingly, Shifrin's video began going viral over the weekend. And that's when her bosses found it. Although she planned to work for the whole month before leaving, she was told not to bother.

"'I saw this link. Your resignation is accepted,'" Shifrin quotes her immediate boss telling her. "They weren't thrilled with me, but I will say they paid my full salary for October. And asked me not to come in."

The irony here is that the video, which has been featured everywhere from Gawker to Huffington Post to news sites in Australia and the UK, is currently up to 4 million views. After being hounded for months to produce more content to go viral, Shifrin actually succeeded!

"For them, anything that's viral you post. So it was like, 'OK, then you guys should respect the fact I'm going to make a viral video,'" she says.

Now that the yoke of viral-video-making has been lifted, Shifrin is on her way back to the States to try to make it in standup comedy and plans move back to New York. We've asked her to give us a shout once she comes through St. Louis and if she stops by her alma mater.

Asked if she had anything to add, Shifrin says simply, "Go Tigers!"

P.S. In case you were wondering what her most successful video at NMA was up until her "Gone" clip, Shifrin recommends this one: