Say What You Will, Rick Santorum May Be the Hippest Conservative Out There 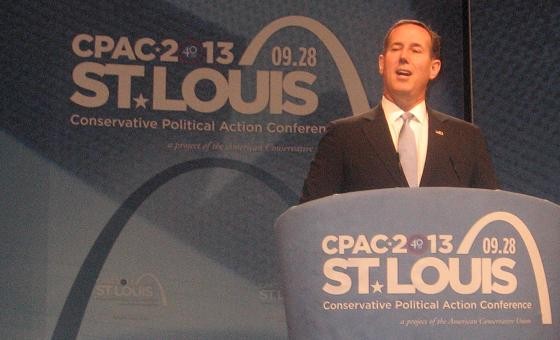 Here is the biggest bombshell to emerge from Saturday's regional Conservative Political Action Conference (CPAC): Rick Santorum was the hippest, most media-savvy speaker in the room.

This was not at all obvious during his 2012 presidential campaign. But, speaking in St. Charles at a conference whose general theme was "America's Future: The Next Generation of Conservatives," he was one of the only speakers all day who really tackled, head-on, the Right's problems with communication and messaging.

It's a timely message. Conservatives complain, often accurately, about the dumbing down of popular culture. Frequently, though, the response is not to provide a viable alternative, but to merely disengage. This essentially cedes the territory to the Stephen Colberts and Jon Stewarts of the world. It also leaves conservatives less able to defend themselves against the conventional slurs as A) plutocrats who only care about money and to hell with everyone else; B) racists whose every criticism can be traced to the president's African American heritage; C) anti-gay bigots; or D) all of the above.

When the Right has tried to engage in the pop-culture arena, the results have often been mediocre at best. There's a compelling Republican message of self-reliance, personal freedom and merit-based success, as well as an oft-overlooked history of opposing slavery and supporting the 1965 Civil Rights Act. This ought to make for good storytelling regardless of affiliation, but you'd be hard pressed to find it in the past decade or so of attempts.

Consider some of the highest profile efforts. Filmwise, neither of the Atlas Shrugged movies reached above a 30 percent score on Metacritic. Musically, Ted Nugent hasn't made a listenable album in decades, and you'll grow very old waiting for an outwardly Right-leaning band to get even a bad review on Pitchfork. On television, there's Dennis Miller on Fox and Greg Gutfeld's Red Eye, but they alone can't compete against the talk shows and comedy shows. You can blame some of this on the natural bias that exists in media toward conservatives, but let's face it: There is no modern-day Frank Capra out there at the moment. If conservatives wish to attract younger voters and better compete in the war of ideas, this must change.

That's what Santorum is attempting these days. Since losing the 2012 Republican nomination to Mitt Romney, the former Pennsylvania senator has gone into the film business. He's started EchoLight Studios, whose stated goal is produce "faith-based" movies. EchoLight's debut production, The Christmas Candle, is due by year's end. At CPAC, Santorum was obviously in promotion mode -- he hosted a screening of The Christmas Candle, and he closed his speech with its trailer. However, he was also the only speaker to explicitly encourage conservatives to get more involved in popular culture.

"Republicans play defense, protect ourselves, guard our eyes. But the issue is: Why?" he asked. "We're the ones with truth. My message to you is: as conservatives we have to get better at telling stories. Because, like it or not, the American people are increasingly relating better with emotions."

"The Conservative movement does not need to change to win. We need to understand and relate with people."

Santorum related this to a broader point: that the liberals live and breathe their politics, and this is evident in their embrace of popular culture. "Why do they win elections? Are there more of them?" he asked. "Every poll suggests that 40 percent of the American people identify as conservative. Only 20 percent identify as progressive or liberal. Yet they are moving the needle. Why?"

The answer, he suggested, could be found in the country's very founding. "The British army was better equipped and better armed. But look at the end of the Declaration of Independence: 'We mutually pledge to each other our Lives, our Fortunes and our sacred Honor.' In short, we wanted it more and we lived it in every aspect. That's what liberals do. And we sit back and do nothing."

It's a message that many in the audience found refreshing. Writing online, journalist Kira Davis called Santorum's speech CPAC's highlight. "Despite all the ridicule and snark about his faith/social conservatism, Santorum is one of the few Republicans taking concrete action and putting his own capital behind an effort to influence the culture in significant ways," she wrote. "He is putting his money where his mouth is, something that the GOP and other conservatives need to start doing immediately."

But will it succeed?

Continue on for more from the speakers at CPAC's St. Louis summit.

At the very least, many of the other panelists and speakers recognized that the problem existed. In a rousing and well-received speech, Louisiana Sen. Elbert Guillory acknowledged, "The average young person in the street associates Republicans with negative connotations of race. But we have a glorious history as leaders of civil rights as Republicans. We have a fantastic story to tell; what we don't have is a sense of urgency." Later, at a panel discussion about immigration, Miami journalist Helena Guirre Ferré discussed her frustrations during the 2012 Presidential campaign. Specifically, she recalled trying to secure a Romney interview for her Spanish-language news radio station. The Romney campaign demanded a "friendly" interview, to which Ferré responded: "Since when are journalists supposed to give friendly interviews, anyway?" Later, she tried to pin down Paul Ryan for a separate interview. "To my shock," she said, "they told me that they don't do 'specialty media.' How can the GOP reach out to 50 million viewers that way? We have to get out of specialty mode."

Panelist Eric Schmitt concurred: "Tone matters. If you think one of the parties hates you, you won't vote for it."

Speakers like Guillory, Colorado state representative Clarice Navarro-Ratzlaff and Brenda Talent from the Show-Me Institute came across as fresh, enthusiastic and motivated. Utah senator Mike Lee and Texas governor Rick Perry both spoke well, as did Townhall.com columnist Guy Benson. In fact, if there is indeed a "next generation" of conservatives coming up, it appears to be happening on a state level. Speaker after speaker lauded such Republican governors as Louisiana's Bobby Jindal, South Carolina's Nikki Haley, and New Mexico's Susana Martinez. However, they were outnumbered by gray-haired white dudes in suits, and some of the panel discussions ended up drowning in minutiae. A discussion about libertarianism vs. social conservatism, for instance, was simply interminable.

This isn't entirely CPAC's fault, Many of its marquee speakers, including Sen. Ted Cruz, were unavailable due to the battle over the Affordable Care Act. At times, though, Guillory's warning about a lack of urgency seemed all too accurate. The past five years have seen issue after issue -- Benghazi, Fast and Furious, IRS abuse, NSA spying, a feckless foreign policy, and an Affordable Care Act which has become mired in delays and waivers before it's even been implemented -- that would have long since sunk a Republican president. Yet there's no sign that any of it has affected the president's personal popularity. Today's conservatives and Republicans can't just assume that they'll win based on the other side's perceived incompetence. Should they wish to not only compete on their own terms but enrich the culture at large, they'd be wise to follow Santorum's advice as the 2014 and 2016 elections loom.

Mike Appelstein can most often be found in the music section of the Riverfront Times. But the freelance contributor (and full-time attorney) also appreciates covering the occasional political rally, like the time Sarah Palin and Glenn Beck came to St. Louis while Defending the Republic.