Update below with reward: Today is Dodger's first day of water therapy. A woman spotted the puppy Wednesday dragging himself along Highway 30 in in Cedar Hill. It was the rescue workers who named him Dodger.

The three-month-old black Labrador retriever had been shot striaght down the spine, apparently at close range. "We knew that it had to be removed immediately," says Tracy Quackenbush, the executive director of Open Door Animal Sanctuary, where the woman brought the injured puppy.

Dodger had to have surgery, and Quackenbush says she planned on paying for the $4,000 procedure with a credit card and would raise the money later.

But then a dog-food company, Nature's Variety, contacted Quackenbush and offered to foot the entire bill. Dodger went into surgery Thursday at Veterinary Specialty Services in Ballwin. The procedure was a success.

In a prepared statement quoted in the Post-Dispatch, Nature's Variety CEO Reed Howlett explained that he had been moved by Dodger's plight: "We felt compelled to act and bring about something positive from a terrible situation," he said.

As for Dodger, it will take some time to heal. Today's water therapy is the first step toward rehabilitating the use of his hind legs.

Qackenbush says her phone rang "off the hook" on Thursday from people who wanted to adopt Dodger or donate money to help fund his treatment. She's set up a website where those interested can give online.

"He's doing good, up in spririts," she tells Daily RFT. "Just not walking on the back legs."

Horrible cases of animal torture are nothing to new to Quackenbush, but she wishes she could pay for the treatment of the other injured dogs (and cats) that have been rescued by the shelter.

She says, "It's very sad that someone would do this to a puppy. To any animal. We see a lot of things here, but any one is just as horrifying as the next. It's great that the community came together to help this guy, but there are so much more out there that don't get recognized."

She tells Daily RFT that a report has been filed with the Jefferson County Sheriff's Office.

Update, 10:30 a.m.: A $1,000 reward has been offered by Open Door Animal Shelter Sanctuary for information on the person or people responsible for shooting Dodger. 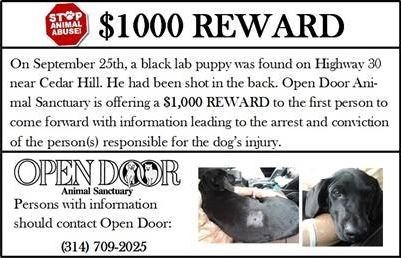