Missouri Ranking: No. 31 In Treatment Of Women, Given D+ 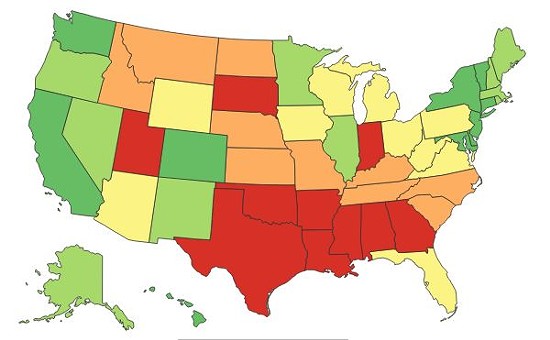 The progressive think tank Center for American Progress just released an exhaustive, nationwide analysis of women's treatment in the U.S. titled "The State of Women in America."

Missouri did not fare well, receiving a D+. Compared to the rest of the nation Missouri was ranked 31st overall, 39th in economic security (D-), 24th in health (D) and 24th in leadership (C). The grades are based on a staggering amount of data drawn from government sources as well other women's advocacy groups. (You can dig into the statistics in the full report, if you're into that sort of thing.)

"Substantial inequalities remain" for women in the U.S, according to the report's introduction, which points specifically to the pay gap between women and men. In Missouri, that means a woman makes 77 cents for every dollar a man makes. If you're an African American woman, it's 67 cents. 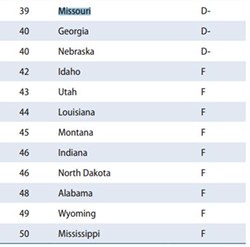 The report is highly critical of states that have passed legislation to limit aspects of abortion and contraceptive services. This focus, obviously, did not help Missouri's ranking. The report counts eight separate restrictions on the state's books for "mandatory waiting periods and counseling restrictions" for women trying to get an abortion.

"[T]he 2012 elections showed that attacks on women's health are not subsiding. Instead, too many politicians -- all too frequently men -- continue to try to interfere with women's reproductive health," the report writes.

You can read more about the report here, and an interactive version of the above map is available to easily click through states' rankings.