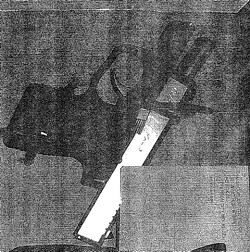 "We have met with Dave to discuss this incident and he has offered his sincere apologies to me, to Speaker Jones, and to his fellow staff members. He is extremely remorseful about this unfortunate incident and willing to take full accountability for his mistake. I have instructed Dave to take an additional gun safety course, which he has agreed to complete in the next few weeks. I know that Dave is a responsible, law-abiding gun owner and that he will never allow a mistake such as this to happen again."

That does not sound like Evans will be disciplined or dismissed.

Original post: A little after 10 a.m. last Friday morning, police were called to a basement-level bathroom at the capitol building in Jefferson City. Inside the second stall of the men's restroom, Missouri Capitol police officer Brian Quick discovered a 9 mm handgun perched atop the toilet-paper dispenser, still in its holster.

"The gun was fully loaded with one round in the chamber and six rounds in the magazine," Quick wrote in his report. "All the rounds of ammunition were hollow point 9mm rounds."

The gun was originally discovered by a custodian who called the Capitol police from the hallway and waited to make sure no one else entered the bathroom.

Police ID'd the gun as a Kahr CM9 9mm pistol.

About an hour after the gun was discovered, its owner apparently realized his mistake. From the police reports (emphasis ours):

On 9/20/2013, at 11:06 a.m., I received a phone call in the communication center from House Speaker Tim Jones's secretary, Lisa Bondurant, who stated that a staffer had left a handgun in a basement restroom and when they went to retrieve it, it was gone. Lisa identified the staffer as David Evans.

Evans is Jones' legislative assistant. After running him through a couple databases to check for warrants and criminal history (which came back clean), Capitol police determined that Evans has a valid conceal-carry permit and allowed to take the gun back.

Elected officials have long had the right to carry concealed weapons into the Capitol and staffers gained the same permissions in 2011.

Representative Stacy Newman, who first notified Daily RFT of the incident yesterday, wrote that she is "livid." One of her constituents, Rebecca Morgan from the Missouri chapter of the group Moms Demand Action for Gun Sense in America, echoed the sentiment and questioned whether she would allow her son to attend a field trip to the Capitol later this year.

"If I had sent my son or any of his school buddies into the restroom they would have found it...It's extremely dangerous and somebody needs to be held accountable for it," she told Daily RFT. "Some kind of change needs to be made because as we've seen, this is not a safe environment for children, obviously, with a loaded, unattended firearm left in a restroom."

Read the full police report below:

In case you're curious about the gun type, here's a YouTube clip of a test of the Kahr CM9 9mm: