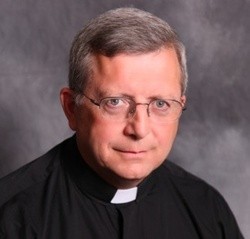 A college student badly injured in a car accident last month received a welcome visit this weekend from Reverend Patrick Dowling, the "Mystery Priest" who appeared seemingly from thin air at the scene of a horrific head-on collision early in August.

Katie Lentz of Quincy, Illinois, was trapped after a car drifted across the center line and hit her vehicle head-on while driving on Highway 19 near Center.

As emergency crews worked to free her, the priest appeared on the scene then slipped away so discreetly some witnesses swore it was an apparition or an angel. In reality, it was Dowling.

As emergency workers tried to free Lentz from the crushed and twisted remains of her Mercedes, the Tulane University sophomore asked if someone could pray with her. Dowling, of the Jefferson City Diocese, was returning from Mass in Ewing when he saw Lentz's wreck and approached the scene. The two prayed, and Lentz was soon airlifted to a hospital.

But Dowling left so quickly that bystanders and emergency workers openly wondered if they had just witnessed something special. Who was that priest? Where did he come from? Was he an angel? Thus the search for a "Mystery Priest" gained international coverage before Dowling's identity was revealed.

Dowling came forward after it became clear how many people were looking for him and issued a joint statement with the Jefferson City Diocese, as well as his own description of the incident:

I asked the Sheriff's permission and approached the scene of the accident. I absolved and anointed Katie, and, at her request, prayed that her leg would not hurt. Then I stepped aside to where some rescue personnel and the pilot were waiting, and prayed the rosary silently. I left when the helicopter was about to take off, and before I got to my car it was on its way to Quincy.

See also: Missouri Mystery Priest Is Patrick Dowling of Jefferson City; "He Is Our Angel," Says Fireman While the world was searching for Dowling, Lentz began her recovery. She sustained numerous injuries, including breaking both her left and right femurs, but the outlook is good.

She adds that her daughter will hopefully be recovered enough to return to school this January. Full recovery, however, will take more than a year.