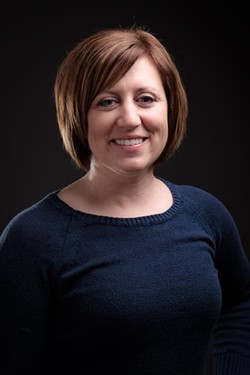 6th Ward Alderwoman Christine Ingrassia wants to keep adults off the monkey bars, slides and other playground equipment in city parks. A proposed bill would empower police to hit violators with up to a $500 fine.

"In a perfect world we wouldn't have to legislate on this at all," she tells Daily RFT. "Other people want to act like bullies, and I feel like I have to act."

Those "other people" are groups of adults and older children that Ingrassia says she's seen loitering on playground equipment, hogging city resources that are supposed to go to young children. Currently there's not much the police can do to remove them unless there is obvious lawbreaking going on. Hence Ingrassia's bill.

Ingrassia says she personally called the the cops about group of men in Fox Park, and police found handguns and a smattering of outstanding warrants. That incident, says the alderwoman, pushed her to find a solution.

See Also: Forest Park Named One Of The Most Beautiful City Parks In The World (PHOTOS)

The alderwoman says that she's heard from parents across the city who are scared to bring their children to play in city parks because groups of rowdy adults frequently use playgrounds as hangouts for drinking and drug use.

Ingrassia admits that using legislation to limit the use of public spaces is a sensitive and controversial tactic. Portions of city parks could suddenly become verboten for adults without a child under twelve in tow. The bill would designate areas of parks that would be publicly marked "Children's Play Areas," which would be open only for children under twelve and their parents or guardians.

That being said, these specially designated areas could also include places like little-league baseball fields, which were constructed with a specific age group in mind, and not adults.

If passed, Ingrassia insists ban wouldn't function as a blanket mandate for police to sweep through parks and clear out undesired adults such as homeless individuals. She says she expects and welcomes public debate and suggestions in the coming weeks as the bill is considered.

"It's not a perfect solution," she says, but points to the use of similar ordinances in places like Miami Beach, New York and Los Angeles as proof that such a tactic can be used in a measured and effective way.

Ordinance pertaining to children only play areas in City parks. by Danny Wicentowski