Sandy Hatte: Discovered in Missouri with Child She Allegedly Abducted 13 Years Ago 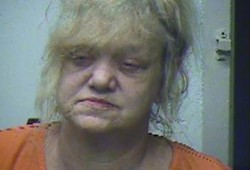 A child abducted 13 years ago in Florida has turned up in northwestern Missouri, according to the Livingston County Sheriff's Office.

Sandy Hatte, 60, was arrested for allegedly taking the child and bouncing around the country for 13 years -- that is, until a local school official took a look at the kid's school enrollment information and called the cops.

The sheriff's office has not released the name, age, gender or any specific detail about the abduction victim. Hatte, not the child's mother but apparently a relative of some sort, allegedly took the child some time around December 2000. It's unclear how Hatte went 13 years evading detection, considering she and the victim were in Livingston country not much more than 30 days before the child's school enrollment set off warning bells.

Deputies showed up to the school on September 18 to take custody of the child, and soon after Hatte was arrested. The child's biological father was located "in the Southern United States" and the family has been reunited. They've departed Missouri.

Hatte remains in jail in Livingston, and though there is no evidence that suggests victim "was in danger," she faces felony charges child abduction.

Before they left Missouri, the newly reunited family was apparently treated to dinner by the owner the Golden Corral in Chillicothe.

As of this writing, Hatte is still in custody.

Here's a sheriff's office's description of the investigation:

The Livingston County Sheriffs Office recently began an investigation after a local school official provided us with information which raised significant concerns over a recent enrollment.

Detective Eric Menconi and Captain Sindy Fitzpatrick spent numerous hours conducting background investigation and located the juvenile's biological father in the southern United States. The deputies also obtained additional information from other law enforcement agencies and/or Courts in Missouri and other state(s) which allegedly gave probable cause to support the allegation the juvenile was abducted about 13 years ago in the State of Florida when the victim was a very small child.

After collecting our evidence/information and multiple meetings with Livingston County Prosecuting Attorney Adam Warren and the Juvenile Officer, we took custody of the child from the school on September 18. We were then assisted by the Child Advocacy Center in obtaining a debriefing interview of the juvenile victim.

We have arrested Sandy Hatte, 60, for alleged felony Child Abduction and since served her with a Livingston County arrest warrant and Ms. Hatte is being held in the Daviess Dekalb County Regional Jail in lieu of $25,000 cash bond.

Click through for addition details the sheriff's office released in an updated statement about the case.

Livingston County Sheriff Steve Cox released this follow up statement regarding the case.

Thank you for your patience, understanding, and respect for all.