Exploring St. Louis should be easy. Why, you've got Riverfront Times' annual Best Of issue to guide you. (2013 issue on stands next week!)

But have you tried just throwing a dart at a giant map of the city?

That's the whole idea behind DART St. Louis, a "participatory photo challenge" that in three years has asked hundreds of creative types -- from professional photographers to rank amateurs -- to embrace randomness as a way to explore parts of St. Louis they may have never visited.

Curt von Diest founded the project in 2009 as a way to entertain and attract clients of FK Photo, though the event has been part of the St. Louis Design Week since 2011. Von Diest tells Daily RFT that the project is now more about revealing the small corners of St. Louis that many people never find reason to see.

"We talk about the problems that St. Louis has, or its shortfalls, but how can we really understand if we ignore whole swaths of the city?"

The deal is simple: Throw the dart and pick out the nearest intersection. Then, participants are given a month to explore the surrounding one block radius, snap a photo, and send it back to von Diest. That's it, there are no guidelines on style, method, subject or equipment. As long as it's a photo near the location where your dart stuck, it's all good. 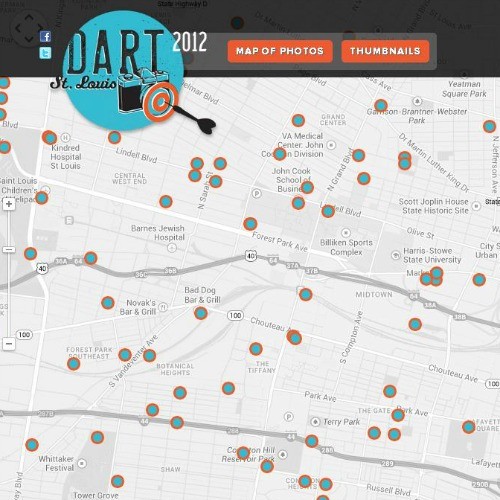 The images are eventually loaded onto an interactive, online map -- clicking the dots reveals the photos.

"There's so many ways to approach what is beautiful in the context of the city," says von Diest.

Oddly, he adds, not one person has ever hit the arch with a dart.

"If someone does hit it," von Diest muses, "I wonder what they'll do."

Below we've included a few of von Diest's favorite photos from last year's event. DART St. Louis 2013 is set for September 24 at FK Studies (2745 Locust Street) from 6 p.m. - 9 p.m., and is open to participation from anybody -- even Instagram addicts or selfie lovers with nothing but a smartphone.