You know it's bad when the politicians turn against strippers. But football fans?! Surely they don't have a beef with naked ladies, right?

Enter Angela Lukenbill and her fiance Chad Smith of the north Kansas City suburb of Gladstone. The couple was planning to attend the Kansas City Chiefs home opener on Sunday when they learned that an area strip club, Chrome Kansas City, was planning to bring some of its exotic dancers to the tailgating festivities.

"I don't want my six-year-old seeing signs of strippers at an event like that," said Lukenbill, who kept her two kids away from Sunday's game. "There's time and place, and that's not it."

But as KSHB-TV discovered when it went to Arrowhead Stadium, the strippers were nearly impossible to distinguish from other fans. 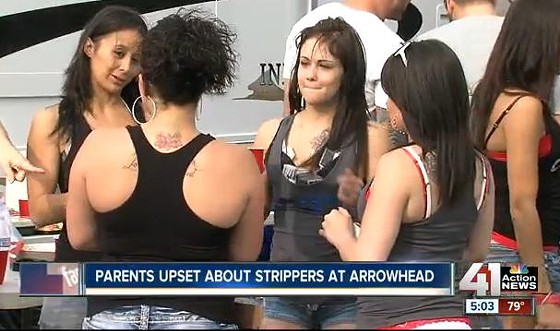 "We're fully clothed. It's not like we're walking around in our heels and bikinis and everything. We know how to act professional," Heather Lienbach, a Chrome KC dancer, told KSHB-TV. "We're just out here trying to get the word out there because a lot has changed in the industry."

In 2010 state lawmakers passed sweeping reforms intended to kill the state's adult entertainment industry. The law bans the sale of alcohol at strip clubs, limits their hours of operations and prohibits strippers from taking off their tops (and bottoms).

Last night Chrome KC defended itself on Facebook stating, "Our intention is to tailgate, have fun, and cheer on our local team. The topic should be 2-0, embrace the wins and celebrate for once."

A similar, though somewhat more risque, stripper brouhaha occurred a few years back in St. Louis when Larry Flynt's Hustler Club brought its "Stripper Mobile" to the streets outside Busch Stadium. In that incident a woman visiting St. Louis with her six-year-old child fired off a complaint to Mayor Francis Slay, stating: "It is so hard to raise our children to become Christians and have good morals in this society. It is even harder to do so with strippers shoved in front of your face in broad daylight." 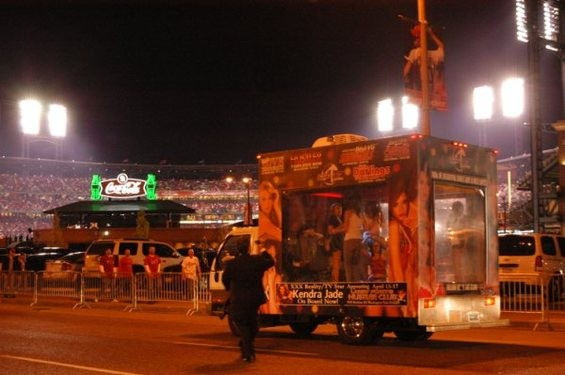 Slay's response? "Unless the truck is parked or creating a dangerous distraction to drivers -- it is legal in St. Louis. It is also probably legal wherever she comes from, unless the local ordinance banning it hasn't yet been challenged on First Amendment grounds."

In Kansas City, Lukenbill says she's filed a complaint with the Chiefs. The organization responded that it would investigate the matter.

Continue on for more photos of the time the Stripper Mobile visited Busch Stadium. 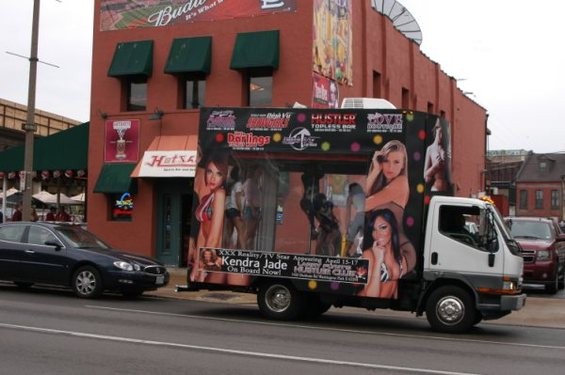