In July, a local family filed a lawsuit against the Archdiocese of St. Louis, alleging that Archbishop Robert Carlson attempted to cover up a priest's sex abuse and tamper with evidence in the process. This suit, surrounding Father Xiu Hui "Joseph" Jiang, was filed after Carlson was subpoenaed in the criminal investigation of Jiang (who is accused of repeatedly molesting a teenage girl in her home). As the case moves forward this month, victims' rights groups are arguing that Carlson's inadequate response reflects a long history of mishandling abuse allegations.

The Survivors Network of those Abused by Priests (SNAP), an advocacy group based in St. Louis, has provided Daily RFT with newly released documents from 1984 relating to a case at the Archdiocese of Saint Paul and Minneapolis, involving then bishop Carlson. The letters, the group argues, shed light on his decades of direct experience with these kinds of cases and repeated efforts to downplay abuse.

"It's the antithesis of what a caring shepherd should do," says David Clohessy, SNAP executive director.

The files are noteworthy because they offer a rare glimpse into a top church official's direct statements and response on sex abuse allegations and they also highlight just how long Carlson has dealt with these kinds of controversies -- a history which, Clohessy says, should better inform his efforts today.

The Archdiocese of St. Louis, however, is strongly pushing back against the criticisms of SNAP, offering Daily RFT a lengthy statement (full response on view below) defending Carlson's record on these matters and arguing that he has been a national leader in this area and a "voice for transparency in clergy sex abuse cases." Church officials say his work is still a model today and that he deserves credit, as an Archdiocese of St. Paul-Minneapolis official puts it, for taking steps in the 1980s to "break the culture of clerical secrecy in our Archdiocese."

The documents relate to Father Thomas Adamson, a Minnesota priest who is accused of child sex abuse and who was allegedly transferred between numerous parishes where he worked with children even after reportedly confessing the abuse to Diocese officials. These documents -- file on view below -- were released as part of a recent legal battle.

In a July 9, 1984 memo, Carlson writes to the Archbishop about the case:

In the counseling process at St. Cloud, it has become evident that [redacted] was also sexually abused from 1972 to 1982. I asked Father Adamson about this and he admitted and, in fact, he had abused the boy during that period of time. I did not go into the sexual activity, but Father Adamson agreed that it probably would be first degree criminal sexual contact.

Carlson explains in the letter that he recommended specific criminal attorneys for Adamson (which he would have to pay for).

Carlson then writes (emphasis ours):

It is my recommendation, given the seriousness of our exposure, that the Archdiocese posture itself in such a way that any publicity will be minimized. I would recommend that in cooperating with Bishop Watters, that Father Adamson be sent to the Paracletes in Albuquerque or to the House of Affirmation. It is obvious to me in dealing with Father Adamson at this time that he has little remorse other than the fact that we found something else out and completely minimizes the entire situation.

Clohessy says that this is another instance of church officials trying to minimize bad press of an abuse scandal. "The first question should be, how do we find out whether he's hurt other kids and how do we help them? And how do we stop him from doing it again?"

The documents more broadly reveal "how much church leaders knew about Adamson and how little they did to stop him," Clohessy says.

Continue for more commentary from SNAP and for the full Archdiocese response.

In the Jiang case in St. Louis -- in which Carlson is soon to be deposed -- the archbishop is accused of attempting to take back money that the priest had given to the family in an effort to keep the parents quiet. This move, the family says in its lawsuit, is clearly a move to tamper with incriminating evidence. The Archdiocese, in its motion to dismiss the lawsuit, says that Carlson vehemently denies this allegation. 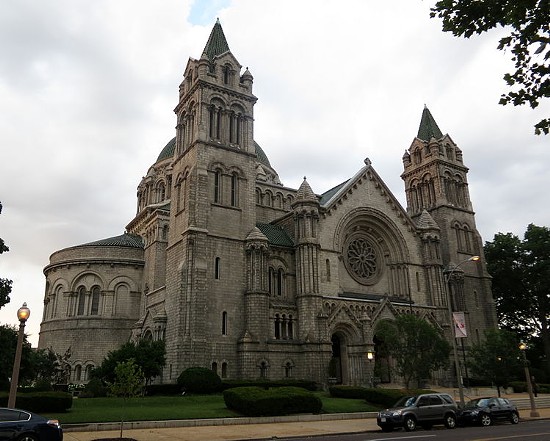 Given that Carlson has experience on the ground dealing with these kinds of cases, he should have known better in the St. Louis case, Clohessy argues.

"Literally thirty years ago, he was dealing, as these letters suggest, in a fairly hands-on, detailed way with one of the very first publicly exposed predator priests," he says. "It points out just how long he has been concealing these crimes and how knowledgeable he is about the details of the statute of limitations."

It is rare that victims do sue and bring to light these kinds of internal documents in this manner, Clohessy notes, adding that it's shocking to see how problematic the church's approach was decades ago. "You should've seen almost nothing but concern for the victim and yet even 30 years ago, you'll see in these documents that the focus is always what do we do about the father?"

A spokeswoman for the Archdiocese of St. Louis sends Daily RFT this lengthy rebuttal from SNAP, which we've printed here in full:

In the last two decades Archbishop Robert J. Carlson has become a voice for transparency in clergy sex abuse cases. The experiences he had with reporting clergy misconduct to church leadership in the Archdiocese of St. Paul - Minneapolis in the early 1980's have influenced the way he handles these cases today as an archbishop. By the time clergy sex abuse unfolded on a national scale in 2002, then Bishop Carlson led the way in South Dakota where he worked with the state's attorney and offered to open up the church's files. Bishop Carlson also required local, state, and national background checks for priests who came in from other dioceses along with other diocesan workers.

Fr. Kevin McDonough, Director of Safe Environment for the Archdiocese of St. Paul-Minneapolis, previously stated, "As frequently as possible in public forums, I credit Archbishop Carlson for taking steps in the 1980's to break the culture of clerical secrecy in our Archdiocese. The work of Bishop Carlson as early as the first half of the 1980's in St. Paul-Minneapolis is still a model of responsible citizenship of honest, open cooperation with public officials and especially concern for the safety of children thirty years later."

In June of 2002 the United State Conference of Catholic Bishops (USCCB) established the Dallas Charter, a comprehensive set of procedures for addressing allegations of sexual abuse of minors by clergy. In the Archdiocese of St. Louis, the requirements of the Dallas Charter are fulfilled by our Safe Environment Office and the Office of Child and Youth Protection. Since 2002, one-hundred thousand people have completed this program. Any adult who is employed by or volunteers in our parishes and institutions who works with minors is required to complete the "Protecting God's Children" program, which teaches how to recognize questionable behavior, to implement practices for the safety of children, and to take necessary steps to address even the suspicion that a cleric or Church worker has done something inappropriate.

A spokesman for the Archdiocese of St. Paul-Minneapolis did not respond to Daily RFT's request for comment.

Here are the full documents in question:

Crime Gettin' All Religious Up in Here News