Thomas Donovan, Priest Who Called 911 Tied Up, Gagging in Bondage Mask, Back to Ministry 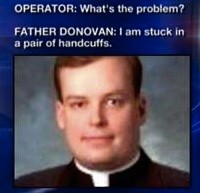 The "bondage priest" is back.

Father Thomas Donovan was the man behind the 911 call heard round the world in which he told a dispatcher that he was in the rectory and needed help getting out of handcuffs. Why was he stuck? He said he was "playing with them" and needed to be rescued before it became an emergency. When cops arrived on that November day, they allegedly found him -- alone -- in some sort of leather bondage mask and an orange jumpsuit.

He was soon after granted a leave of absence and now, many months later, church officials say he is returning to the ministry -- headed in our direction to Alton. The Diocese of Springfield says it will be a "gradual" process.

First, let's listen to that call again, via the Illinois Times, which sparked the viral coverage:

Some notable excerpts of the gagged priest's labored remarks:

"I am stuck in a pair of handcuffs and am going to need help getting out before this becomes a medical emergency," he says.

"I am stuck in a pair of handcuffs," he repeats. "I was playing with them so I need some help getting out."

He goes on to explain that he is in the St. Aloysius rectory and that he is the only one there. The priest was soon thereafter discovered in an orange jumpsuit apparently with "a leather bondage-type mask with a bar in his mouth."

And why exactly was he in this situation? Church officials later referred to it as "non-sexual self-bondage."

Fast forward to this week when the Diocese of Springfield Illinois issued a lengthy press release explaining his "gradual return to ministry," which is beginning next week in Alton.

A special panel apparently convened to advise Bishop Thomas John Paprocki about its recommendations. He will, officials say, be assigned as chaplain to the Sisters of St. Francis of the Martyr St. George, with residence at their provincial house in Alton, effective Monday.

"The Sisters have agreed to this assignment in a spiritual environment and supportive atmosphere of prayer and compassion," Paprocki says in a statement.

In a letter to Paprocki, panel members said they reviewed relevant material concerning the November 28 incident, the release says, including reports from mental health professionals summarizing treatment, diagnoses and recommendations for Donovan. The panel apparently conducted both a "lengthy and probing interview" and a "full personal interview" with the priest.

The panel concluded that he was indeed alone at the time of the 911 call and that there he is not a danger to himself or others.

The panel also recommends that "Father Donovan's ministerial and therapeutic progress should be regularly and carefully monitored for the foreseeable future."

"I have accepted the conclusions and recommendations of the panel and am grateful to the members of the Special Panel for their time and expertise in addressing this matter," Paprocki says in his statement. "I also commend Father Donovan for his complete cooperation with his spiritual directors, medical and therapeutic professionals, and members of the panel."

Here's a copy of the panel's letter, made public yesterday:

Crime Gettin' All Religious Up in Here News