Rodney Lincoln, who has been incarcerated for decades, met five grandchildren for the very first time yesterday during a highly anticipated St. Louis hearing that breathed new life into the effort to prove his innocence.

"It was surreal to actually be in that courtroom," his daughter Kay Lincoln tells Daily RFT. "My father walked into the room and a hush fell over the entire room. I'm almost couldn't breathe. This is finally happening."

Lincoln has been behind bars for 30 years, serving two life sentences for the horrific April 27, 1982 slaying of JoAnn Tate, 35, and the assault on her two daughters, then ages seven and four, at their St. Louis apartment. Lincoln, now 69, has always maintained his innocence and his family is optimistic once again that he may finally walk free.

"I'm hopeful," says 44-year-old Kay Lincoln, one of dozens of family members who attended the hearing yesterday. "I've always been confident that eventually he'd be freed."

But now that decision could come in a matter of weeks, she says.

As Circuit Attorney Jennifer Joyce outlines in a statement on yesterday's hearing, her office back in 2001 announced the formation of the DNA Justice Project, a "proactive review of convictions made before her tenure and prior to the early 1990s, when forensic DNA technology became an accepted tool in Missouri courts."

The conviction of Lincoln was one of the first that she identified for additional testing.

In 2003, new scientific analysis was conducted upon evidence seized from the scene of Tate's murder and, as Joyce puts it, "no additional evidence was identified which had the potential to lead to DNA analysis which might exonerate Rodney Lincoln." But in 2010, her office agreed once again to do additional DNA testing of the evidence:

The hairs that were tested recently did not play a central evidentiary role when the case was tried in 1983. The recent DNA testing indicates that hairs found on one victim belonged to a female and an animal. A hair found on a blanket did not match Lincoln's DNA but that absence does not prove his innocence.

"The most important point that was made was that the evidence that was used against him at trial has been absolutely irrefutably proven not to be his," Kay says. "If the jury had known this was not his hair, would they have come to different conclusion? It's obvious that they would have." 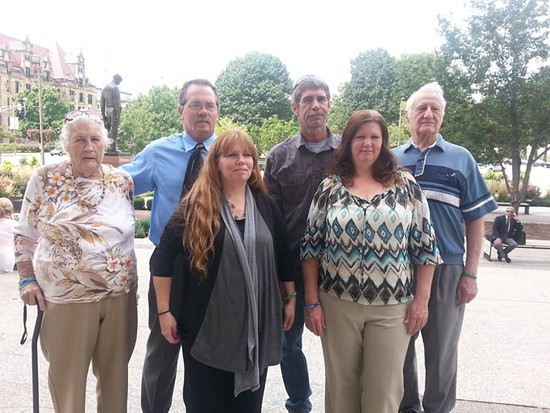 Joyce says in her statement, "We believe a thorough review of the trial transcript as a whole indicates that Mr. Lincoln was appropriately held accountable for the murder of JoAnn Tate and the assault on her two daughters at their St. Louis apartment on April 27, 1982."

The family meanwhile remains hopeful that a judge will vacate the conviction. If not, Lincoln's attorneys are prepared to keep fighting, Kay says.

After the hearing yesterday (the Post-Dispatch has a detailed account), Rodney Lincoln was able to visit with his family. "I've never seen a defendant be treated so humanely in a courtroom," Kay Lincoln says of the visit.

She adds, "I'm much more confident and optimistic after the hearing."

Here is Joyce's statement in full: