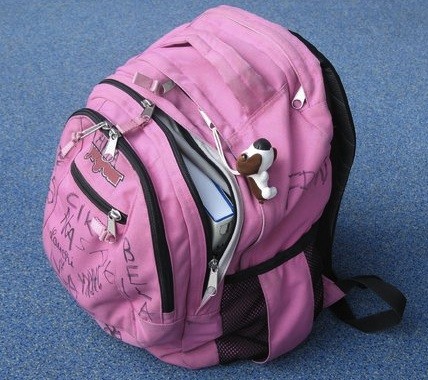 Since the tragic elementary school shooting in Connecticut last year, there have been all sorts of heated debates across the country about what we can do to better protect children. In Missouri, much of the conversation has revolved around arming teachers and employees. One High Ridge business, however, has a different approach to the problem -- one that will cost interested parents $500 per child.

Nutshellz LLC, the business behind the shatterproof groin protector, is soon unveiling "Guardian Angel" bulletproof inserts for children's backpacks -- and creator Jeremiah Raber says it will be worth every penny.

"If you have this extra money to protect your kid, you want to know you have the right thing in there," he tells Daily RFT.

See also: Video: A Test of "Nutshellz," the Saint Louis-Invented Groin Protector That Can Take a Bullet

Raber emphasizes that the final product will look a lot nicer and more child-friendly with blue and pink colors and perhaps some sort of design referencing the "guardian angel" monicker.

"I started noticing a trend with a lot of these companies that are making these backpack inserts for kids," he says. "It's kind of screwed up."

That trend, he argues, is that they are not actually bulletproof -- or at least would not protect students from the kinds of weapons that have typically been used in these terrible school massacres.

He says that the materials typically put in these kinds of school bags have low ratings by National Institute of Justice standards and could be penetrated with the powerful rifles that shooters like Adam Lanza used.

"I want to tell parents possibly looking at these for their kids, you are putting this lesser material in their backpack, thinking that if some madman goes into the school, you have this peace of mind," he says. "It's not going to stop them."

That's why he decided to create his "Guardian Angels" inserts that he knows will work. He says he's starting to generate hype for the product now on his website and will soon put it on the market.

They weigh about two-and-a-half pounds and will cost around $500 given the price of the materials he is using.

"It fits amazingly," he says of the SAPI plates, which are often used by police and military.

He says he has fired ten rounds into the product with his own AR-15 and that the bullets do not penetrate.

Raber says he understands that not every parent can afford this product -- but argues that it could actually make a difference in the case of an armed intruder.