Willow Long: Justin DeRyke, Uncle of Stabbed Girl, 7, Says He "Had to End Her Suffering" 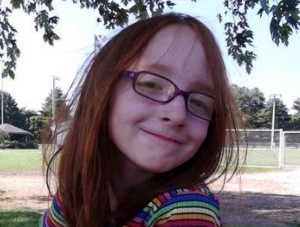 Justin DeRyke, the 22-year-old Illinois man accused of murdering his seven-year-old niece Willow Long, allegedly stabbed her to death because he "believed he had to end her suffering."

That's the story he told cops, according to a disturbing probable-cause statement from the Effingham County State's Attorney's Office. DeRyke is facing murder charges in the death of the young girl, who went missing on Sunday from her home, sparking a massive search that ended in tragedy on Monday evening near Watson, which is about 100 miles east of St. Louis.

The statement outlines a confession DeRyke made to police, allegedly telling them that the girl tripped and fell into a brush pile, causing a stick to impale her in the neck. He told cops that he wanted to put her out of her misery and thus repeatedly stabbed her to death before dumping her body, the charges say.

The case of Long's disappearance first started getting attention when cops initially reported that she vanished from their home while her mother was taking a nap.

The charges, which include graphic details from her autopsy, offer a timeline of the search and how police ultimately discovered Long's uncle was allegedly responsible for her death.

Long lived at a residence in Watson with her mother, her three-year-old brother, her uncle DeRyke (her mother's brother) and her maternal grandparents.

On 10:46 a.m. Sunday, the mother first called 911 to report that the girl was missing. She told cops that her daughter left without her glasses, too, stating, "Willow has very poor eyesight and...would seldom leave the house without her glasses," the statement says.

Several hundred volunteers began searching on Sunday, and Illinois State Police dispatched planes and helicopters to help in the search.

DeRyke, however, did not assist others in the search.

Instead, he went to his job at a restaurant establishment in Effingham -- showing up one hour early.

Police learned from initial family interviews on Sunday evening that the grandparents, who are over-the-road truck drivers, had left Saturday evening to haul a load outside of Illinois. Long's mother was out at a local bar Saturday night as well, police say.

DeRyke was alone with Long and her brother. 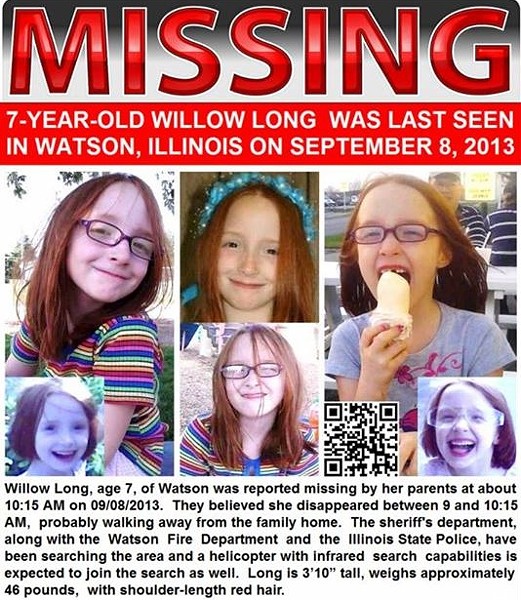 On Monday, DeRyke gave police his account of what happened and how the girl died.

He allegedly told cops that he spent most of that Saturday night in his bedroom playing video games, but that at one point, he went to the bathroom and masturbated to a pornographic video.

After spending 30 minutes in the bathroom, Long came up behind him and tugged him on the forearm to ask him to watch television with her, the statement summarizes of his comments to police.

At this point, the girl apparently scratched his forearm causing him to bleed:

He became angry at the sight of blood coming from his forearm....

The Defendant then started to yell at Willow Long. Subsequently, Willow Long ran out of the front door of the residence toward a brush pile where the DeRyke family dumps the cat litter. Justin then chased after Willow.

[A]ccording to the defendant, while running away from Justin toward the brush pile, Willow Long tripped and fell into the brush pile causing a stick to be impaled into Willow's neck.

While the stick was impaled in Willow's neck, Willow began to twitch while lying on the ground, according to the Defendant.

He believed "he had to end her suffering," the statement says, prompting him to grab a knife from his bedroom and slit her throat. He then allegedly stabbed her in the heart about five times.

At this point, he took her body and wrapped her in plastic bags before driving to a rural location south of Watson and dumping the deceased girl, cops say.

The autopsy concluded that her throat had been slashed and that she had a three- to four-inch laceration on her collarbone. Cuts were also found on her hands, "which were consistent with being defensive wounds."

It's unclear why the mother initially told cops that her daughter went missing Sunday morning when she had actually been gone that evening, according to the charges.

Police say she returned home from the bar after midnight.

Here's footage from KSDK-TV (Channel 5) which interviewed the grandfather of Long, father of the suspect:

And here are the full charges, with names of other family members redacted: