Earlier this year, we reported on the efforts of Maryland Heights-based company Westport Pharmaceuticals, rolling out its nasal decongestant called Zephrex-D. The product got a lot of attention because its makers say it's a powerful decongestant relief that is also formulated in a way to "block all commonly known methods of meth making." This is, of course, especially relevant in Missouri, the Meth Capital of the United States, where methamphetamine cooks often illegally use over-the-counter meds to manufacture the drug.

Now, Zephrex-D is available in pharmacies across the country, the company says in a new press release, which bills the drug as the "first and only pseudoephedrine product to stop 'one pot' meth." The Drug Enforcement Administration, however, is still contradicting the local company's claims.

And the DEA thus will not allow it to be sold over the counter.

In a statement to Daily RFT, a DEA spokeswoman writes:

The DEA welcomes the efforts of companies to develop products that deter the production of illicit drugs.

While this particular company claims that their "drug delivery system provides an new and unconventional approach to combat drug misuse", this product can still be utilized to manufacture methamphetamine. As such, controls on this product cannot be relaxed as this product does not meet the exemption criteria under the Controlled Substances Act (CSA) [21 United States Code (U.S.C.) § 830(e)(3) and 21 Code of Federal Regulations§ 1310.16].

Missouri has launched a range of efforts to try and curb the sale of cold and allergy medicines to methamphetamine cooks, and the thinking behind Zephrex-D is that it is an effective medicine for customers and a simultaneously useless product for manufacturers of the illicit drug.

In its press release, Westport Pharmaceuticals emphasizes that Zephrex-D is designed specifically "for consumers and against criminals." 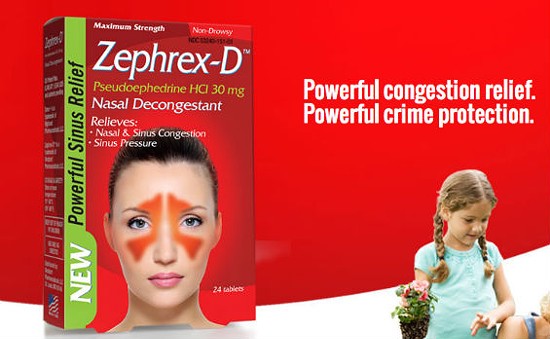 It cannot be used to make meth the widespread and dangerous "one pot shake and bake" way, according to testing and statements from narcotics officers, the company says.

"Zephrex-D® provides the unsurpassed congestion relief consumers expect from pseudoephedrine. It also provides peace of mind. Anyone who chooses Zephrex-D® will be doing the right thing in helping keep their streets and communities safe for their families and kids," Paul Hemings, vice president and general manager at Westport Pharmaceuticals, says in a statement. "We have a great product for legitimate sinus and cold sufferers, but meth-making criminals will have to look elsewhere."

More than 15,000 pharmacies, including major national retail chains, have begun stocking Zephrex-D in preparation for flu season, the company says, noting that more will be added in coming weeks.

The company argues that during eight months of test marketing in Missouri, Zephrex-D was not found in any seizures, citing the Missouri Narcotics Officers Association. The testing apparently began in December 2012 and involved more than 300 stores.

Still, as the Associated Press reports, because of the DEA's stance, Zephrex-D must remain behind the counter, which means buyers have to first show identification and have their names put in a database.

The company's release includes this quote from Jason Grellner, unit commander of the Franklin County narcotics enforcement unit, defending the medicine: "This product has been out since December and we haven't found it used at a single meth lab site in Missouri."

Westport has long argued that it is an important part of a solution to the meth epidemic:

All Americans are impacted by the meth epidemic. Meth abuse costs US taxpayers approximately $23.4 billion annually. These costs include, but are not limited to: law enforcement, uninsured burn victims, incarceration and rehabilitation of addicts, foster care for dependents, toxic waste cleanup and secondary meth crimes. More importantly, these costs are increasing, not diminishing.

A spokesman for the company declined to comment to Daily RFT on the DEA's remarks and emphasizes that Westport is moving forward with its plan.

Here's the company's lengthy press release in full, which outlines its defense of Zephrex-D: