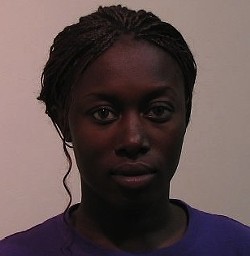 Grey very well may have gotten away with it altogether if it weren't for a family member who reportedly ratted her out.

On Tuesday last week, the Madison County Sheriff's Office responded to a Granite City home at around 11 a.m. in reference to a disturbance involving Grey and another family member who lived at the residence, police say. And while investigating, "one of Grey's family members handed the deputy a plastic bag that contained 69 empty jewelry boxes," the office reports.

That family member, police say, told cops that Grey was "involved in some type of criminal activity" related to these empty boxes.

Cops couldn't immediately link them to any reported thefts, but the deputies seized the evidence and launched an investigation.

Eventually, the sheriff's office linked the boxes to Hurley and Company Jewelry on Chain of Rocks Road in Granite City. Police met with company representatives who confirmed the boxes belonged to them and that their contents had been stolen from the business sometime within the previous week, police say.

The business hadn't yet formally reported the theft to cops and it was apparently trying to determine the time of the theft.

Police and the store reps figured out that the theft had happened on August 27 -- and that Grey was responsible. Surveillance footage showed that she had entered the business with two children, around ages six and eight, and distracted the employees on duty while the kids went to the displays and stole merchandise.

Here's a screengrab from that footage, via KTVI (Channel 2), which has some clips of the alleged theft:

They then placed the jewelry in her purse and a second bag, which she carried out of the business.

Police say the estimated retail value of the stolen goods is around $100,000.

Cops say they have recovered only about $10,000 worth of the stolen jewelry -- and Grey remains on the loose.

Police say she may be residing somewhere in East St. Louis. Anyone with information is urged to call the sheriff's office at:

The woman, who police say also goes by the last names Grey-Roland and Gray, is facing charges of contributing to the criminal delinquency of a minor and a felony burglary charge. Her bond is set at $70,000.

Here's a larger version of that mugshot from Madison county: