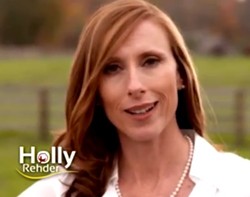 So says State Representative Holly Rehder, a Republican from Sikeston, in her most recent weekly Capitol Report e-mail sent to constituents on Friday.

"My degree is in Public Relations and one point that was hammered home throughout my study is that 'Perception Is Everything,'" her letter begins. "This tidbit has been proven for years, if you will remember propaganda served as an important tool to win over the majority of the German public during Adolf Hitler's rule. I say this to remind you that you simply cannot take one side's viewpoint and proclaim it as the gospel. It behooves us all to research both sides of a debate before weighing in."

She then goes on to criticize the governor's efforts to drum up opposition to the bill:

I've had some very interesting emails regarding House Bill 253; the Tax Cut bill that the Missouri Legislature will attempt to over-ride next week. I've explained the details of this bill in a previous Capitol Report and requested that you not take my word for it, or the material being sent from the Governor's office. To make this as non-partisan as possible, I requested that you talk to a third party CPA or Accountant (as this is a tax bill) that you trust and get their opinion of the bill. To date, I have had more contacts from constituents in favor of this bill than those against it.

At least one lawmaker has already condemned the remarks as inappropriate and offensive, full letter on view below.

The legislation in question is House Bill 253, one of several proposals that may be debated once again on Wednesday. Nixon, a Democrat, vetoed the legislation earlier this year, and some Republican lawmakers are working to override the governor and enact the law.

In recent weeks, the governor has traveled across the state holding press conferences in a variety of venues to criticize this tax cut proposal, which he says in his veto message is an "ill-conceived, fiscally irresponsible experiment that would inject far-reaching uncertainty into our economy, undermine our state's fiscal health, and jeopardize basic funding for education and vital services." He and other critics argue that the legislation would increase taxes on prescription drugs and college textbooks and provide special treatment for some businesses while discriminating against others.

Nixon has made speeches at children's centers, schools, pharmacies and other settings around the state to make his case.

The legislation got a lot of attention last month when Texas Governor Rick Perry, a Republican, came to Missouri to push for an override of Nixon's veto.

Rehder, in her e-mail, says "the opposition's talking points are simply not true."

She argues that the opposition's claim that Missouri could lose $1.2 billion in tax revenue is contingent on five separate factors, which she then outlines.

She adds, mentioning "propaganda" once again (emphasis hers):

The Governor's office has withheld $600 million in education funding since 2009. They understand how propaganda and fear moves our public.

I will say again, as I did in my last article - the facts are clear - Missouri is shrinking. A glaring reminder is that we lost a congressional seat in the 2010 census. Another fact - Missouri ranks 48th in economic growth over the past decade. We need to stop the scare tactics with education and government services.....our focus should be on growing Missouri.

The e-mail and Hitler reference has already received some media attention, but it does not appear that Rehder has offered any additional commentary. Daily RFT reached out to her over the weekend and will update if we hear back.

In the meantime, you can read her full comments here. State Rep. Stacey Newman, a Democrat, sent Rehder this letter yesterday:

Last week you issued a public statement to your constituents regarding Governor Nixon's stance on House Bill 253. You wrote, "My degree is in Public Relations and one point that was hammered home throughout my study is that 'Perception Is Everything. This tidbit has been proven for years, if you will remember propaganda served as an important tool to win over the majority of the German public during Adolf Hitler's rule."

I was extremely offended, as were many of my family, of your comparison of opposing policy views to the insanity of the Holocaust. Your comment was completely insensitive to those families throughout our state who have been forever altered by this horrific event in world history. Your policy differences with our governor can be in no way comparable to the propaganda of Adolph Hitler.

There are many families in Missouri who include Holocaust survivors. My husband's grandmother, his father, uncle and two aunts barely escaped Nazi Germany. His grandmother (our daughter's namesake) lost her eight sisters and their extended families. One of the few remaining photos of her entire family are among the treasured photos displayed in our home and we do our best to keep their memories alive. I would be happy to share with you our personal family stories of survival and devastating loss. We would never show our surviving aunt, who is 91 years old, your remarks for fear of how it would personally cause her anguish. Such casual references to a man associated with unbelievable atrocities are a great insult.

I understand that you might be passionate about a particular policy and desire to influence others as to your particular views. But using Adolf Hitler's name to advance your viewpoint only incites and inflames. It does not persuade rational people.

Perhaps you were unaware that your statement was hurtful. I encourage you, as an elected official, in the future to be respectful and not lightly reference, what to you may be a chapter in a history text book, but to others never forgotten family horrors. These analogies do nothing to advance your argument and are severely inappropriate.

As your House colleague, I respectfully ask for your consideration in future debate.