African Americans in St. Louis city and county have a notably higher death rate than white residents -- and a new report, with some alarming statistics, digs into how poverty and education factor into these disparities.

The policy brief from Washington University assistant professor Jason Purnell examines local mortality rates and how early deaths owing to limited economic and educational opportunity have broader consequences for the region. The study, released last week, is the first in a larger multidisciplinary project called For the Sake of All. It also establishes a specific monetary cost of this loss of life.

"These disparities have an impact on the entire region. It goes beyond African Americans," Purnell tells Daily RFT, adding, "we should care that our neighbors are dying at higher rates."

See also: Missouri Has Highest Rate of Black Homicide in the Nation

The For the Sake of All research project, funded by the Missouri Foundation for Health, is focused on the health and well-being of African-Americans in St. Louis and will involve five policy briefs culminating in a larger report released next year.

This first brief -- which poses the question, "How can we save lives -- and save money -- in St. Louis?" -- begins by outlining the basic death rate disparities. The statistics cover the city and county: 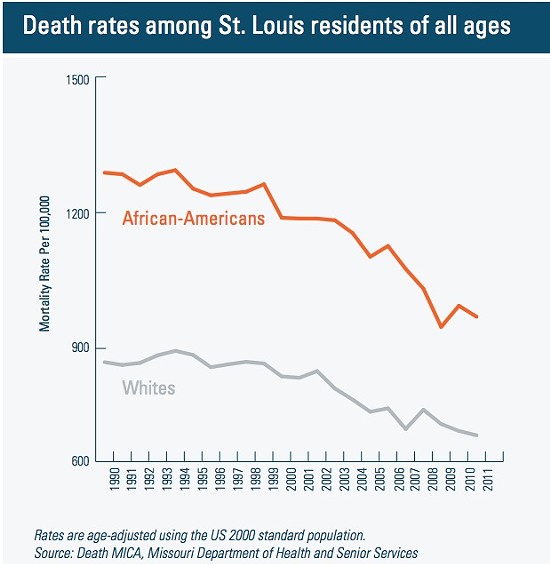 Based on a complex formula and city and county data, his study concludes that in 2011, 280 African American deaths were due to poverty and 237 were due to "having less than a high school education." The report illustrates these stats with MetroLink cars in this way:

How did he reach these conclusions?

The paper's appendix offers a fairly detailed explanation on how the research links mortality rates to poverty and education. The methodology relies on an American Journal of Public Health paper, which conducted a "meta-analysis that included 24 studies on the association of low levels of education (defined as less than high school) and all-cause mortality and 14 studies on the association of poverty (defined as below the federal poverty line) and all-cause mortality."

This new study essentially plugged in mortality, poverty and educational data for St. Louis into this pre-established formula.

"One of the objectives of this project is to broaden the conversation of health and health disparities to include some of these social factors," Purnell says, adding that the research effort will "hopefully include people who represent sectors that aren't normally around the table."

The report also calculates that those 2011 African American deaths add up to a significant cost:

As explained in the appendix, the estimate of the cost of premature deaths comes from a "social value" of life measurement that is used across different fields.

"$3.3 billion is a loss of productivity to the region and should concern everyone," he says.

And here are graphics from the report outlining the relevant St. Louis education and poverty data, respectively: 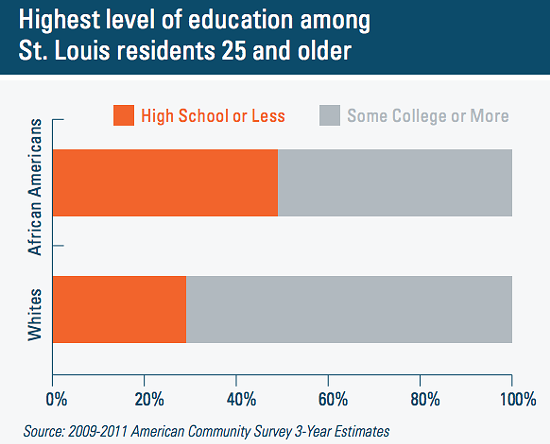 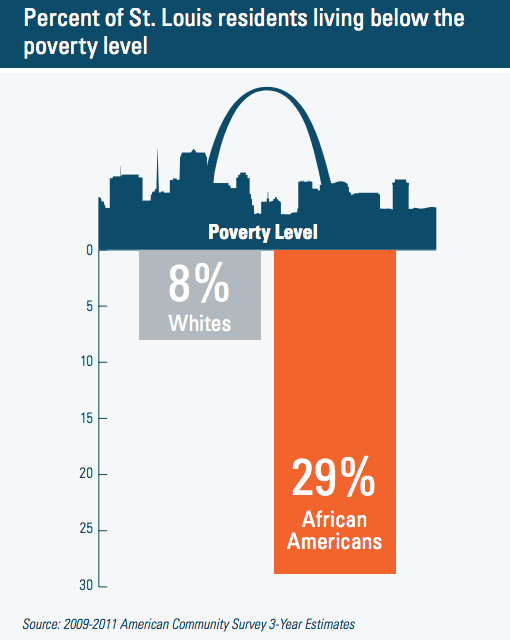 His report goes on to outline a series of specific policy recommendations to address these disparities.

Continue for more from the report on policy recommendations and the full document.

One recommendation is to "invest in quality early-childhood development for all children."

Well-designed programs, the report explains, include small classes, significant time spent on instruction and support that prepares children for school, school-family partnerships, an emphasis on social and emotional development, a focus on mental health and more.

Of early-childhood development efforts, he says, "That's one of the most powerful investments we can make. It has both economic and health impacts."

The report goes on to prescribe targeted investments in this category, such as reversing the nearly $10 million in cuts to early childhood programs in the state budget.

A second recommendation is to "help low- to moderate-income families create economic opportunities," with the report arguing that college savings accounts should be universally available for children at birth and financial advice and services should be easily accessible to families at all income levels.

Purnell says he hopes that those who read his study would be encouraged to weigh in and offer their own perspectives.

"We want the input of the community on refining this set of recommendations and coming together around an agenda for moving these policy recommendations forward," he says. "This brief should be considered a conversation starter and not an end product."