Since it was first introduced at the Missouri legislature, a controversial bill to block federal gun laws has faced steady criticism from opponents arguing that it would be unconstitutional and a logistical nightmare. The most important dissent came from Governor Jay Nixon, a Democrat, who vetoed the legislation in July, saying that Missouri cannot make it a crime to enforce certain federal laws.

Now, one week before GOP lawmakers -- with the help of some key Democrats -- attempt to override Nixon and implement the gun law, Attorney General Chris Koster has expressed his opposition to the initiative, with a letter illustrating some key problems he believes will arise if it is enacted.

See also: State Rep.: Gun Control Is Not Constitutional Even if Obama Says It Is

The opposition from Koster, a Democrat who may run for governor, is not all that surprising, but does carry implications beyond the standard rebuke from critics. If the measure becomes law, it is expected to spark a range of legal battles, possibly with the U.S. Attorney General's Office, which may actively push back against a state law that criminalizes federal ones. In the case of litigation, Koster would be in the position to defend Missouri's law.

In a letter Koster sent to lawmakers yesterday, he explains that the legislation, House Bill 436 (the Second Amendment Preservation Act) will undoubtedly face federal scrutiny -- with some provisions ultimately deemed unconstitutional.

What's more interesting is Koster's argument that even if a federal review shoots down parts of the legislation, there are some components that could stay on the books and create serious roadblocks for local law enforcement efforts.

In case you haven't been following closely, a quick recap of the proposal: The bill, labeled one of the most extreme states' right effort and pro-gun initiatives in the country, rejects all federal laws that infringe on Missourians' rights to bear arms. Most controversially, law enforcement officials that enforce or even attempt to enforce federal gun laws could be charged with misdemeanors. 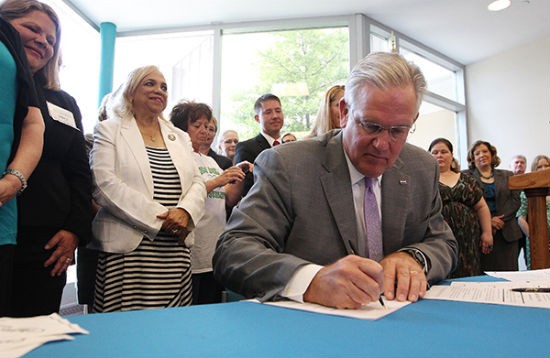 Koster lays out some specific scenarios that raise new and troubling questions about the tangible impact of the bill.

His letter, full document below, says that "among the provisions of HB 436 that will likely remain law are provisions that 1) call for an end to cooperative efforts between state and federal law enforcement officials, 2) grant criminals a right to sue police officers for enforcing the law, and 3) create confusion in Missouri's concealed carry law."

He explains (emphasis his):

[L]egislatively restricting state law enforcement's ability to work cooperatively with federal law enforcement is flawed public policy. What is a state trooper to do if he or she comes across a felon who has sold guns to a group of illegal immigrants? As you are aware, the sale of guns to illegal immigrants is not addressed by Missouri statutes, but is unlawful under federal law. By enacting subsection 5, the General Assembly will make it unlawful for a state trooper to even refer the seller to federal prosecutors.

He says he will defend portions of the bill that are defensible, but must "clearly and emphatically distance my office from your proposed policy to prevent state law enforcement officers from 1) enforcing valid federal gun laws and 2) participating in joint law enforcement efforts."

Further, the bill, he says, would allow criminals to sue police officers for enforcing the law, which is unprecedented public policy.

He provides this example:

When a police officer in the City of St. Louis recovers a fully automatic machine gun from a drug dealer's car, should the matter no longer be sent to the U.S. Attorney's Office because the federal Gun Control Act of 1934 outlawed the weapon?

His letter provides several more lengthy arguments against the legislation.

Proponents argue that Missouri has an obligation to stand up to the feds and President Barack Obama in the face of gun control policies. Both sides seem to agree that if the bill is enacted, a legal fight is inevitable.

The legislature will meet September 11 to vote on a potential override.