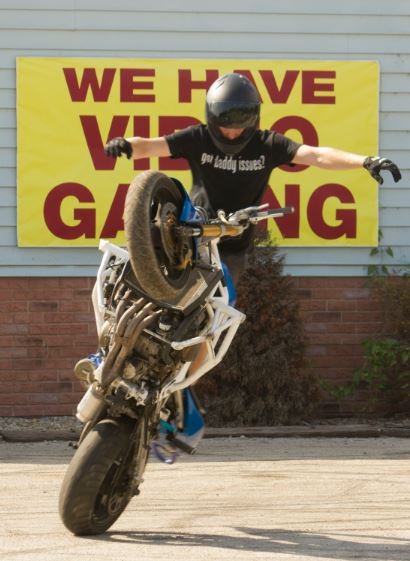 Around 1,000 riders came out for the Ride of the Century Funfest at Top Shooters Sports Bar in Columbia, Illinois, on Saturday, and though the event itself was peaceful, many complained of police profiling. During the six-hour event, law enforcement vehicles were stationed on the road leading to the bar, and riders told of an additional checkpoint set farther down the road.

Bounced from its original venue at Big St. Charles Motorsports due to police pressure, the Funfest allowed riders from across the country to safely pull wheelies, donuts and other stunts on a closed course outside the bar (not to mention provide of a place for them to drink, mingle and buy t-shirts). No incidents were reported at the Funfest, but tensions have been high between riders and police this weekend. Slews of arrests, two deaths, and numerous motorcycles seized by law enforcement have only added to the perception among the ride's organizers that 2013 could mark the final Ride of the Century.

You can check out photos from the event below, but keep your eye on Daily RFT this week, as we'll be digging further into riders' claims of widespread police profiling of motorcyclists, the aftermath of the many arrests, and what future, if any, exists for an event that has called St. Louis home for over a decade.

See Also: Ride of The Century Rider Blames Police for Chaos on Streets; "They Cannot Stop The Ride"

Send feedback and tips to the author at danny.wicentowski@riverfronttimes.com