After days of increasing tensions between police and the Ride of the Century participants, two riders died in crashes over the weekend. Many others were arrested and cited for a range of violations.

Metro police yesterday identified the victim in one of the fatal crashes as Michael Evans, a 32-year-old Harrisburg, Illinois resident. According to cops, he was speeding with a group of motorcyclists at around 6:05 p.m. on Saturday near an unmarked police vehicle on duty by Elizabeth and January avenues in the Hill neighborhood in south city. The group of riders were allegedly traveling southbound -- in the northbound lane.

Evans' motorcycle clipped the unmarked cop car while attempting to pass on the right, according to police.

The motorcycle then fled off the roadway and struck a pole in the wooded area by January Avenue, the incident report says. He was pronounced dead on the scene and the officer was uninjured. The full report from the St. Louis Metropolitan Police Department is below.

Rohe, the highway patrol says, was thrown from his motorcycle and pronounced dead on the scene a short while later.

Police did not have injury information for the 49-year-old woman in the other vehicle. The full report is below.

It appears both fatal victims were part of the Ride of the Century. Rohe wasn't directly involved in the event at the time of the accident but had reportedly attended a press conference on Wednesday in support of the ride.

As we chronicled last week, law enforcement agencies across the region strongly emphasized that they would be cracking down on reckless and illegal behavior, prompting some participants to accuse police of exacerbating tensions and unfairly profiling riders. One St. Charles sponsor even canceled a Ride of the Century event amid police pressure, prompting a Columbia venue to step up and host.

Ride of the Century was founded by a group called Streetfighterz, a five-member St. Louis-based motorcycle stunt organization.

On Friday, according to the metro police department, officers observed at least nine motorcycles "driving recklessly," arresting all of them around the 4100 block of De Tonty Street in the Shaw neighborhood. One of the motorcycles had a stolen engine, police note.

All nine were charged with careless and reckless driving and one of the riders faced a receiving stolen property charge. Two of them were cited with expired license plates and no operator's license charges. 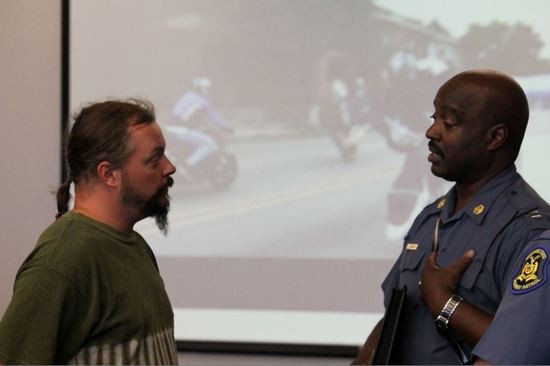 The St. Louis Metropolitan Police Department says in a statement, "The safety of our citizens and visitors is our top priority. While we welcome motorcyclists to our city, participating in reckless and dangerous behavior on our roadways will not be tolerated. All violators will be cited and/or arrested."

On Sunday, KMOV (Channel 4) says police made 15 arrests and towed 25 motorcycles during the final stretch of the ride. Ten of those arrests were reportedly for traffic charges while five were for stolen vehicles.

Here's KMOV's report on the arrests followed by the full police summaries.

The SLMPD summary on the fatal city accident.

Incident: Fatal Accident Location: 2300 block of January Date/Time: 8/31/13 @ 18:05 Victim: Michael Evans, 32-year old black male of the 600 block of Webster An officer was operating an unmarked police vehicle on duty in the area of January and Elizabeth when he observed several motorcycles traveling at a high rate of speed, southbound in the northbound lane. He felt an impact on the passenger side of his vehicle as the victim's motorcycle attempted to pass him on the right. The motorcycle left the road way and struck a pole in the wooded area on January. The victim was pronounced deceased on the scene. The officer was not injured.

And the Missouri State Highway Patrol on the St. Charles death.