Father William Vatterott, a St. Louis priest indicted in federal court on a child pornography charge, has pleaded guilty and is now facing a three-year sentence.

"Child pornography is a sin and it is a crime," the Archdiocese of St. Louis says in a statement. "The Archdiocese fully supports the prosecution of crimes against children. Today, we pray for the safety and dignity of all children in our archdiocese and around the world."

He was sentenced today to 37 months in a federal penitentiary.

Vatterott has been on administrative leave from St. Cecilia since June of 2011, when the Archdiocese learned of the allegations involving "inappropriate electronic communications received by a minor and an incident of underage drinking," church officials say. 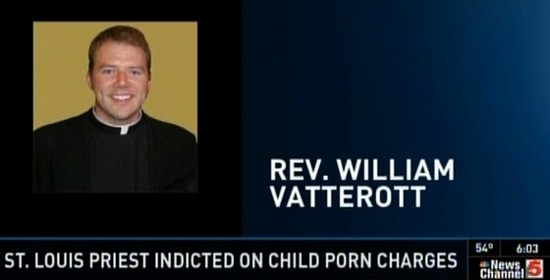 The original complaint reportedly made no mention of child pornography, which the Archdiocese says was discovered during the investigation.

In a statement fired off this morning before the sentencing was announced, the Survivors Network of those Abused by Priests, a St. Louis-based advocacy group, accused the Archdiocese of initially trying to downplay the scandal: "Sadly, in this case, like so many others, Catholic officials deceive the public and the parishioners. When Fr. William Vatterott was suspended, Archbishop Robert Carlson said he was accused of 'inappropriate electronic communication.' In fact, he has been criminally charged with child pornography."

The Archdiocese notes in its statement:

In the Archdiocese of St. Louis, we have established the Safe Environment Program set forth by the United States Conference of Catholic Bishops. Anyone who works with or volunteers with children on a regular basis must complete the Protecting God's Children workshop and pass a state background check.

The Archdiocese of St. Louis encourages all persons with reports of misconduct with a minor involving a member of the clergy or other church personnel to contact Deacon Phil Hengen, Director of Child and Youth Protection at (314) 792-7704 or the Missouri Child Abuse and Neglect Hotline at (800) 392-3738 or law enforcement officials.

According to SNAP, Vatterott is the ninth local priest to face child pornography allegations.