Ride of The Century Rider Blames Police for Chaos on Streets; "They Cannot Stop The Ride"

What should you do if your car is suddenly surrounded on the highway by a mob of roaring street bikes and crotch-rockets?

"Stay in your lane," urged Shane Harper, who will be attending his fifth Ride of the Century this weekend along with 3,000 riders from St. Louis and across the country. "Maintain your speed, and we will get around you." He and two other riders attended a police press conference yesterday to criticize and question the tactics that police say are designed only to target lawbreaking motorcyclists.

But Harper's confidence doesn't match the dismal outlook expressed by one of the cofounders of Streetfighterz, the five-member St. Louis-based motorcycle stunting group that founded Ride of the Century more than a decade ago. Adam (who asked his last name not be printed) told Daily RFT earlier this week that the current format of Ride of the Century "has seen its final days" because of police pressure on the riders.

Whether the event's riders are actually willing to change remains to be seen, but police demonstrated yesterday that they've been thinking seriously about how to make life difficult for those brave (or crazy) enough to pull off stunts like this. Or this. Definitely this.

And nothing makes time less enjoyable than involving your insurance company. For the second year, cited or ticketed motorcyclists can expect their insurance providers to receive a sheet of paper on police stationary informing them that their client is up to some highly risky behavior.

Holding up an example of one of these notices, St. Louis County Police Chief Tim Fitch said many riders don't fear getting caught since a lawyer can usually reduce the traffic violation in court. Basically, sending insurance companies these notices tilts the balance back in law enforcement's favor, since getting caught pulling stunts during Ride of the Century now could pose additional -- and serious -- financial consequences for a rider's insurance.

"We're not saying they're guilty of a crime," Fitch said. "We're just bringing it to their [insurance company's] attention and telling them that we have issued this citation."

Fitch's distinction was lost on Jason Cadell, who will be attending his first Ride of the Century this weekend, who argued that "riders are going to be prosecuted through the insurance company. [The police] are circumventing due process."

Continue for more on this year's controversy and the official Ride of the Century statement. 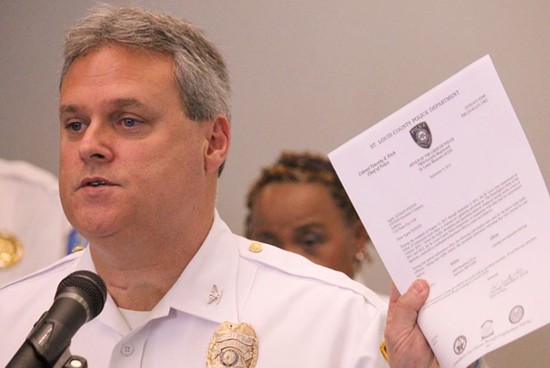 Strained would be a gentle way of describing the relationship between Ride of the Century and local law enforcement. The bad blood has already prompted one of the ride's sponsors and venues, Big St. Charles Motorsports, to abruptly cancel a planned event on Saturday that the dealership says would not only have hosted hundreds of riders and their families but would have kept those riders off the highways.

"This was the hardest decision I've had to make in five years, to cancel something that was supposed to be a lot of fun," Terry MacCauley, general sales manager of the dealership, told Daily RFT. "The only reason was the pressure of law enforcement."

During last year's event, highway patrol set a checkpoint right across the street from Big St. Charles Motorspots in a commuter parking lot. This year, MacCauley said, he's concerned about his customers, especially the Harley riders who will be at the dealership Saturday looking at the new 2014 models.

"What we're scared of is that the police will unduly harass legal motorcycle riders [or] run everyone's plates and tow them," he said. (According to the Ride of the Century Facebook page, the event will be held at a different venue.)

MacCauley's worries mirror those of individual riders like Harper, who said he's been hassled by police in the past simply because he was riding a sports bike.

Harper says he sees the riders of the event as victims, arguing that police's overzealous and heavy-handed pursuit of motorcyclists is the real cause for the chaos on the highways. "[The police] spend their time, money and resources making this event a problem for the city."

As for Streetfighterz, the group sent no representative to the police press conference yesterday, though it did post its own press release on the Ride of the Century Facebook page.

The Ride of the Century (ROC) will take place on Sunday, September 1st, 2013, in St. Louis, MO. The Streetfighterz organization strongly encourages anyone that attends the ride to please ride safely, respectfully and in the boundaries of the law. We have arranged a closed course venue on Saturday, August 30th, where riders will have the opportunity to perform stunts and/or tricks in a controlled environment. This venue is completely removed from public streets and is provided in an effort to keep motorists as safe as possible by removing stunt riding from the public.

The ROC originally started as an event where friends and fellow motorcycle enthusiasts could come together for one last ride before the end of the riding season. Over the years, as the event has grown, so have the number of participants. With this growth, it is clear that the ROC has become overwhelming for motorists on the highways, the general public and law enforcement. The intent and purpose of the ride has never been to cause chaos and mayhem on the roads, but instead, have an event where people and motorcyclists with similar interests could come together and share a passion for motorcycles.

Again, during the events this weekend, please be safe, respectful to other motorists and obey all traffic laws while riding. Law enforcement will be doing their due diligence to ensure the safety for all on the road.