In January, Matthew Buckingham posted a Craigslist ad in St. Louis seeking people who wanted to "help wounded warriors" and sell raffle tickets to aid veterans. It was part of a charity "Veterans Aid From All Foreign Wars." The ad said he would hold a raffle on July 4, 2013, with five-dollar tickets and prize offers of $3,000, $2,000 and $1,000.

Prosecutors say he told interested parties that he was employed by the United States government, had served in the military in Afghanistan and Iraq, was a Marine who had been injured in war and previously worked as a military sniper. Since returning from overseas, he claimed he worked for the Department of Homeland Security, the U.S. Coast Guard and "undercover" infiltrating north St. Louis gangs.

None of it was true.

Buckingham, a 41-year-old St. Louis county man, pleaded guilty yesterday to one count of impersonating a federal agent before U.S. District Judge Henry Autrey. Sentencing is set for November 25 and the charge carries a maximum penalty of three years in prison potential fines of up to $250,000. 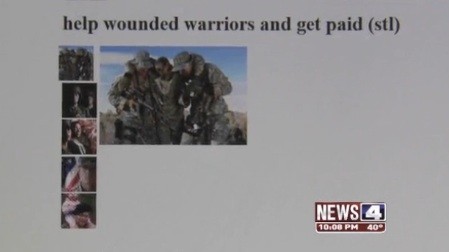 The U.S. Attorney's Office for the Eastern District of Missouri says a number of women responded to his Craigslist ad and agreed to meet him at various restaurants and bars in St. Louis in winter.

He introduced himself as Tyler Matthews.

Police say he had individuals complete employment applications and other official-looking documents indicating their desire to aid and assist in his charitable efforts. He allegedly showed them a binder of various documents proving his military affiliations and the legitimacy of his charity.

He allegedly told them they would earn ten dollars an hour or half the amount they collected from ticket sales. In January and February, he recruited about five to ten associates to assist him in selling "raffle" tickets at bars in St. Louis. He would then take all the proceeds from the sales and use them to pay various expenses, like gas for transportation and "fees" or earnings for his associates.

No money remained after covering those costs, prosecutors say.   And there was no raffle on July 4. No money went to wounded or homeless soldiers, veterans, or other military personnel as he had promised.

He has never been employed by any federal agency and has never served in the military.

"For more than two hundred years, brave Americans have heeded the call to serve their country," Rear Admiral Kevin Cook, eighth coast guard district commander, says in a statement. "We honor them for their loyal and dedicated service. It disheartens me that this individual falsely represented himself as war veteran and a current member of the Coast Guard and Department of Homeland Security in order to garner support for his raffle scheme."

Cook also gives out a shout-out to KMOV-TV (Channel 4), which alerted authorities to the case with an investigative piece earlier this year.