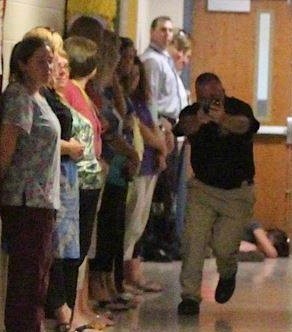 Schools in Lincoln County are preparing for the unimaginable: an active shooter inside the building.

Yesterday, the Lincoln County Sheriff's Office posted a dramatic photo of what, at first glance, appears to be a terrible incident unfolding inside the hallways of a school.

The photo was taken inside Main Street Elementary School where the sheriff was apparently presenting a "real-life scenario" for teachers and staff to experience in an effort to help them understand how best to respond if a shooter does break into a school.

The department says it will be doing this in every school in Lincoln County.

The trainings do not involve students.

Here's the full version of that photo: Since the tragic Sandy Hook Elementary School shooting last December in Newtown, Connecticut -- in which a gunman shot and killed twenty children -- there have been heated debates across the country about gun control and school safety.

Missouri has been no exception. Earlier this year, we reported on a controversial proposal in Christian county to arm teachers. St. Louis County Police Chief Tim Fitch got a lot of attention for suggesting a similar idea in the immediate aftermath of Newtown. St. Louis metro police officials offered seminars for school violence response in the months after the Connecticut shooting.

Shooting-intruder drills that do involve students have sparked backlash in the past, with some questioning whether it's psychologically damaging to children and unnecessary given the statistical rarity of these shootings.

Lincoln County police emphasize that this training only involved employees. Here's the full message the office posted along with its photo.

The Lincoln County Sheriff's Office conducted active shooter training for Main St. Elementary School employees (ONLY) today. The Sheriff presents a real life scenario for teachers and staff to experience so they can better understand and respond to active shooter events. The Sheriff plans on providing every school, in Lincoln County, this training.

Here is a photo of LT Lucas Wicks responding and engaging an active shooter from today's training.